In a virtual CSIS Seminar on May 17, NTI Co-Founder and Co-Chair Sam Nunn joined author, professor, and military historian Frank L. Jones to discuss Jones’ new book Sam Nunn: Statesman of the Nuclear Age. The discussion of the former Georgia senator’s extraordinary career, hosted by CSIS President and CEO John Hamre and moderated by NTI’s Vice President for Materials Risk Management Laura Holgate, explored the past, present, and future direction of arms control and nonproliferation initiatives. Jones emphasized that looking at these issues through the lens of Nunn’s unique role as a leader in the U.S. Senate shows how congressional leaders have the capacity to make the country, and the world, a safer place.

Bipartisanship and the importance of Congressional Committees

Jones highlighted Nunn’s record of bipartisanship, noting that it was critical to his effectiveness as a statesman from the time he was first elected in 1972. When asked about obstacles to bipartisanship today, Nunn observed that “to have legislation that is successful and really addresses the critical issues that we face, you have to basically have a common set of facts.” To reestablish trust in information and restore effectiveness in Congress, “start with the committees,” Nunn said. “Committees are where you have to educate the members on details that are enormously important.”

Jones then focused on how Nunn’s background and experiences helped shape the development and passage of the legislation that established the Nunn-Lugar Cooperative Threat Reduction Program.

Earlier in his career, Nunn saw how plummeting morale impacted the readiness of the post-Vietnam American military, including potentially the critical mission of ensuring the security of U.S. tactical nuclear weapons. 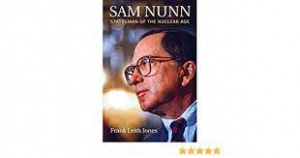 He anticipated that the Soviet war in Afghanistan would have a similar effect on the Soviet military, an alarming prospect given that, as Nunn pointed out, the USSR “had the largest arsenal of nuclear, chemical and biological weapons and materials.”

Jones recounted how Nunn found himself in Moscow immediately following the August 1991 attempted coup aimed at Soviet President Mikhail Gorbachev, just months before the final dissolution of the Soviet empire. Being in the right place at the right time gave Nunn invaluable insights moving forward as he personally witnessed tectonic geopolitical changes at three distinct levels. He saw the end of the bipolar world order at the system level, while being in Moscow gave him a front row seat to changes at the state level. Lastly, his personal interactions with Gorbachev showed him what was happening at the individual leader level.

These experiences were critical to informing his landmark piece of legislation, the Soviet Nuclear Threat Reduction Act of 1991, better known as the Nunn-Lugar Act. Nunn told the audience that he came back from his visit to Moscow “99.5% convinced” that the concept of cooperative threat reduction was necessary to secure and eliminate vulnerable nuclear and other weapons of mass destruction and the materials to make them that were left in newly independent states following the fall of the Soviet Union. The concept became policy, but not without a significant bipartisan effort. “It was looked on as crazy legislation when it was first introduced,” Nunn said, with legislators on both sides of the aisle saying, “how can we possibly help our former enemies?” Fortunately, the facts prevailed. “Seeing facts on the ground […] gives you the confidence you need to really take on the critics and finally persuade them.”

Nunn’s career did not end when he left the Senate—and neither does the book. “I felt that there had to be an epilogue in the book because just to end it in 1996, early 1997 […] was not really a complete picture,” Jones said. Specifically, it did not capture Nunn’s ongoing work on nuclear risk reduction at the Center for Strategic and International Studies and his founding of the Nuclear Threat Initiative in 2001. That work informed his ideas for the future, embodied in the “Four Horsemen” op-eds published in the Wall Street Journal, in which Nunn, along with former Secretaries of State Henry Kissinger and George P. Shultz and former Secretary of Defense William J. Perry, called upon governments to embrace the vision of a world without nuclear weapons and to take practical steps toward that goal.

Nunn concluded the event by highlighting a number of policy recommendations to realize this vision. He urged the U.S. government to conduct an exhaustive “failsafe review” of nuclear command-and-control procedures with an eye to minimizing the risk of an accidental nuclear launch. “Once we do our failsafe review we should challenge every other country to do the same thing,” Nunn said.

In addition, he encouraged the creation of a liaison group in Congress to foster cooperation with the executive branch on nuclear arms control issues, cooperation at home being a requisite for negotiating agreements with Russia and China. Such agreements should not be viewed as “a reward for good behavior to Russia or vice versa. It’s an absolutely essential step to protect our home security, to protect European security, and it also, of course, applies in Asia.”

It also is important to take steps to increase the amount of time presidents have to respond to a nuclear crisis, Nunn said, especially considering the blurring of the threshold between conventional and nuclear war and the emergence of cyber threats to nuclear command-and-control systems. Eventually, a significant enough increase in decision time could make nuclear weapons less relevant, paving the way for their decommissioning and, in turn, a world without nuclear weapons.

Sam Nunn: Statesman of the Nuclear Age was published in December 2020. More details about the book can be found here.