Get to Know NTI: Page Stoutland

Page
Stoutland is NTI’s Vice President for Scientific and Technical Affairs. He focuses
on strengthening cybersecurity for nuclear weapons systems and at nuclear
facilities and addressing the impact of new and emerging technologies on NTI’s
mission. Prior to joining NTI, Stoutland spent 10 years at Lawrence
Livermore National Laboratory (LLNL) where he held a number of senior positions
and was instrumental in developing and leading LLNL’s programs in support of
the post-9/11 homeland security effort. He holds a bachelor’s degree from St.
Olaf College in Northfield, Minnesota and a doctorate in chemistry from the
University of California, Berkeley. Page sat down with NTI’s Caitlyn
Collett for the latest in Atomic Pulse’s “Get to Know NTI”
series.

Before joining NTI,
you worked at several national laboratories. What was your favorite project
while working in labs?

I think some of the more interesting projects were when I
first started at Los Alamos National Laboratory at the beginning of my career.
We built an apparatus that was able to do what’s called picosecond infrared
spectroscopy – meaning we were able to measure very short timeframe reaction
dynamics.

We applied that to some biological molecules of interest, as
well as to understand fast reaction dynamics in polymer films that was of relevance
to imaging technology – sort of next-generation laser printers.  The combination of building the apparatus and
the actual technical work was fun and interesting and something that I
certainly missed as I moved onto other assignments.

What inspired you to
move from that kind of research work to policy?

When I was at Los Alamos, I was doing some basic science, but
it was evident to me that at a national laboratory the main focus was national
security work. Because I’m a chemist, I became interested in how we might
address chemical and biological issues in the realm of national security.

I had the opportunity to come back to Washington to assist
in a newly formed program that was working to develop chemical and biological
defense technologies. It was a one-year assignment that turned into a four-year
assignment, and that was my introduction to the Washington world and policy.

You must have
discussed a lot of important issues during those assignments. What do you think
is the greatest threat facing the world today?

I’m very concerned about cyber threats that can affect
infrastructure as well as nuclear facilities. That’s certainly something we
think about here at NTI.

In addition, I’m increasingly concerned about how information
can manipulate public opinion, whether it be through cyberattacks or
information attacks, as we’ve seen in the most recent election. I think that’s
a very concerning development and I don’t know how we’re ever going to completely
solve that problem. I think the spread of information technology and malevolent
uses of such technology is really concerning looking forward.

What do you think
that people can do as individuals to kind of like mitigate that threat?

Yes, I don’t know other than —

Yes. I think we have to get back to thinking about how facts
matter and considering the reputation of the media outlets that we receive our
information from. Whether it’s The New
York Times or elsewhere, readers should be curious about whether an outlet has
a history of good journalism, how their people are curating and documenting it,
and what journalists are referencing. Maybe there we can get some traction. 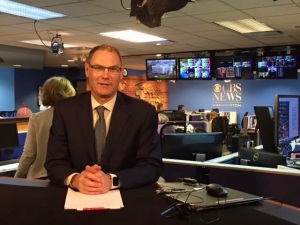 Of course people who are seeking good journalism
may not be the people we need to worry about. It’s the population overall, and
you only have to shift some small fraction of them to make a big difference.

Knowing that something is true is actually incredibly difficult,
because we all have very limited experiences. We typically don’t automatically
believe something is true, but rather because somebody we trust has told us
it’s true.

So, it’s a very difficult problem. Hopefully you’ve got some
ideas.

I’ll start
brainstorming right away.  Can you tell
me a bit about what you’re working on NTI?

We’re working on the implications of new technology on
catastrophic threats. I think the implications can be both positive and
negative. I think it’s clear that the cyber threat is making addressing nuclear
weapons issues even more difficult. Cyber threats are very destabilizing and can
lead to miscalculated use of nuclear weapons. So we spend a lot of time
focusing on how to mitigate that risk.

Maybe on the more positive side, we started a new project
that will use large quantities of publically available data to monitor and
maybe even verify agreements having to do with proliferation. Contrary to what
I discussed earlier, the fact that we’ve got all this public data has a lot of
potential, and we’re trying to figure out how to demonstrate that and how to
use that for positive purposes.

The world definitely
has a lot to learn on these issues. I heard you briefly taught a course at
George Washington University on the “Science of Nuclear Materials,” which was
actually my favorite course when I was in grad school there. What did you learn
from your time teaching?

I learned that students are really smart, incredibly hardworking,
and are really trying to make a difference. It was great to see young people
with the optimism one tends to lose as we get older. It was really gratifying. 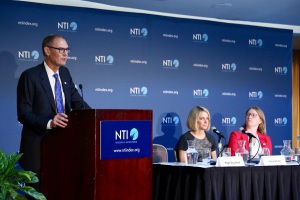 I think it’s always gratifying to share one’s experiences
with others. So for that particular class, which was about technology issues
and nuclear issues, since I’d done a fair bit of technical work and policy work
in my career, and it was nice to be able to bring those together in that
class.

Do you have any
advice for those young people as they continue their studies and careers?

I do.  I think it’s
important for young people to go out and get what I call “real jobs.” By that I
mean something that’s got real deadlines, maybe even delivering something to a
sponsor, and if you’re scientist, doing scientific work.  Something that’s hands on and you can sink your
teeth into.

The flipside of that is that a lot of young people want to
get out and do policy work of some sort. Policy development requires not only
knowledge about the issue, but a certain experience base and you don’t
typically have that experience base when you’re in your early 20s. So, I really
think it’s important to go out and do something, develop skills and then maybe
come back to the policy space at some later time.

I could see why it
would be hard to jump in to making a change, when you haven’t yet seen what
needs to be changed.

Yes, it really is. Plus, it is difficult to have your voice
heard as a new-to-the-industry 23-year-old, even if you have great ideas. It
could be the same idea coming out of your mouth that somebody who has been in
the business for 30 years. But if you’ve been in the business for 30 years,
you’ve got enough gravitas that people will listen.

Hopefully the
incoming generation of policymakers will read your advice. My next question is
sort of “out of left field.” What would be your first question after waking up
from being cryogenically frozen for 100 years? What would you be most curious
about what’s happening in the world?

I would wonder what my kids were doing. I would want to know
how they turned out.

I think that’s a fair
first question. What do your kids do now?

So, I have four. I have three older kids, and a younger one.  My oldest daughter is working in Doha at the Brookings
Institution, and my older sons are fourth-years in college at the University of
Chicago and Pomona College. My youngest daughter is two-and-a-half and is
enjoying life like two-and-a-half year olds do.

Sounds like they’re
all thriving. My next question is, aside from your work at NTI, what could you
give a 40 minute presentation on with absolutely no preparation?

I could give a 40 minute presentation on cross-country skiing.

Really? That’s so
unique! Do you cross-country ski often? Where do you usually ski?

Yes! We ski all over the country. We just got back
from a training camp in West Yellowstone, Montana. And we ski up in Northern
Michigan, Vermont, New York, Pennsylvania. 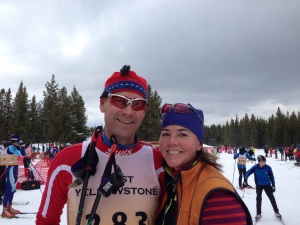 My favorite is probably West Yellowstone because it’s spectacularly
beautiful and it has one of the best trail groomers in the country. The skiing
is always perfect there.

How did you get
started? That’s not a common hobby.

I got into it when I went to college in Minnesota. In
Minnesota in the winter, there’s not much to do other than ski. So, we started
skiing and ski racing and I’ve just sort of been obsessed with it ever since.
The frequency of my skiing depends on the year, but one year I skied everyday
between Thanksgiving and April.

I love being outside all year round, but winter is so
magical. That’s my complaint about Washington, we don’t have good enough
winters.

It’s wonderful that
you get to travel so much to ski, but what’s your favorite place you’ve
travelled for work?

For work, favorite place? I’ve been to a lot of places, but it’s
hard to beat Scandinavia. I mean, of course I’m of Norwegian heritage myself,
so maybe it’s like going back to my youth or something. But, I mean, Stockholm
and Oslo are great cities.

It’s on the water and it’s so beautiful. The food and the
people are just great. It’s a very diverse city, and it’s easy to get around
practically. So, it’s comfortable. That said, I’ve had great experiences in
many cities. Minsk I found to be interesting.  Places in China, I’ve been have been quite interesting.
Everyone loves Vienna, but to be honest it doesn’t do much for me. I was in
Toronto recently. Toronto is a great city.

Wow, I wouldn’t have
expected that either. My final question is what is one item you couldn’t live
without?

One item can’t live without. This is fascinating – there’s
probably nothing. Because I’m pretty adaptable, but what could I not live
without? So the – it’s like what things do I have that I really could never see
myself getting rid off, other than my kids. My bicycle comes to mind. That
would be hard to give up. My heart rate monitor, I kind of like that, but I
could probably give that up. What else do I have? I have so many skis, I could
give up any one of them and it wouldn’t be a problem. I’m very minimalistic in
a sense.

That’s very
Scandinavian of you. 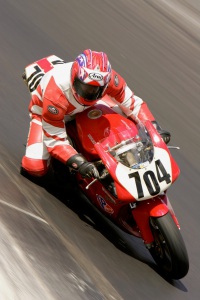 I suppose that’s true. What I really care about are some of
my toys. So, my bicycle, my motorcycle, my skis. It’s not like I couldn’t live
without my phone.

I feel like that
would be a common answer. I think that in reality I probably couldn’t live
without my phone.

Right, but you don’t want to admit that.

Artificial Intelligence has many potential applications and consequences for strategic risk. Here is NTI’s work on it so far.

The bombings of Hiroshima and Nagasaki in 1945 made clear the destructive force of the light, heat, blast, and radiation from a nuclear explosion. But what exactly would the effects of a nuclear explosion mean for the world today?

What happens “if we can’t rely on the information we have,” asks Christopher Painter, former top U.S. cyber diplomat. In an NTI seminar on January 25, Painter posed this critical question and discussed a range of issues at the intersection of cyber and nuclear security.