Get to Know NTI: Richard Johnson

Richard Johnson is NTI’s Senior Director for the Fuel Cycle and
Verification program. He works on issues pertaining to nuclear verification,
including International Atomic Energy Agency (IAEA) safeguards as well as a
specific focus on Iran and North Korea. Before NTI, Johnson
served as the deputy lead coordinator (acting) for Iran Nuclear Implementation
at the U.S. Department of State, and he earlier served as Director for
Nonproliferation at the National Security Council. He graduated as
valedictorian from Claremont McKenna College and later earned his masters
degree at Princeton University’s Woodrow Wilson School of Public and
International Affairs. Richard sat down with NTI’s Caitlyn Collett for the latest in Atomic Pulse’s “Get to Know NTI” series.

You just got to NTI a few months ago from
the State Department. Could you tell me a little bit about what you were doing
there?

Well, I was a State Department employee
for almost 12 years. I joined the U.S. government as a Presidential Management
Fellow, which is a program that brings recent graduate students into the
federal government. Over my 12 years, I did a number of jobs and rotated to
different offices and agencies within the government, though my home agency was
always the State Department. My last job was basically to oversee and manage
the office that was implementing the Iran nuclear deal.

My most recent
assignment prior to that was working at the White House at the National
Security Council where I was the Director for Nonproliferation. I covered a
range of issues there including the Nonproliferation Treaty (NPT) itself, North
Korea, and civil nuclear issues, among others.

In fact, one of
the great things about coming to NTI is I am being reunited with a number of my
former colleagues from the NSC, including Ambassador Laura Holgate, Lynn
Rusten, Beth Cameron, all of whom I worked for and with. It’s sort of a
reunion. And, of course, I got to know Secretary Moniz working on the Iran
nuclear deal. I worked with him and supported him when he worked on that issue.
It’s nice to come and work with him again.

You just returned from a trip to Asia with Secretary Moniz,
right? How was it while you were there?

It was very
productive.  I love going to Asia.  That part of the world is where I first
started getting very excited about international relations and international
security issues. One of my majors in college was Asian studies and I studied
abroad in China and learned to speak Chinese.
I kind of always thought I was going to be a China hand in our world, and
I still do have a lot of interest in China and follow the issues very closely.

So going back to
Asia any time is always exciting for me.
We didn’t go to China on that trip because it was their national holiday,
but we went to Singapore, South Korea, and several cities in Japan.

What were some of the highlights of your trip?

I think the biggest highlight for me was going to Hiroshima
for the first time. For somebody who works in the nuclear nonproliferation
field and cares passionately about preventing the use of nuclear weapons, it
was very moving to go and see that place and to be reminded of the terrible
impact that nuclear weapons can have when they are used. 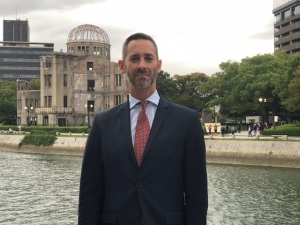 It
was also, I would say, somewhat uplifting because you come into Hiroshima and
it’s just a very verdant, vibrant area.  It’s
green, it’s very lush and the city is very active.

So, you’re kind of
struck by these two themes, the terrible destruction that occurred there and
the memory of the people who were lost there, but also this sort of rebirth and
how this city and country have recovered.

That sounds very
impactful. Speaking of your time abroad, I heard you were posted at the Embassy
in Beijing for a time during your tenure in the State Department. What was your
favorite part about living and working abroad?

You know, I love to
travel, and I love being overseas. China was the first place that I ever lived
overseas and the first place I ever really immersed myself in a foreign culture.
It’s one of the perks of the job that we get to travel or live overseas for a
while.

I love
Beijing.  It feels very comfortable to
me.  I first started going there 19 years
ago and it’s a very different city now in many ways.  Obviously it’s modernized and changed, but
the history there is so rich that I always come back to that as kind of my
must-go place.

Another thing I
will say is I think across administrations I am always impressed by the quality
and the professionalism of our diplomatic corps.  And, you know, working with people in our
embassy in Beijing, which attracts the finest of the finest, was always just a
pleasure.  The people that work there are
just phenomenal.

Wow, I’d love to
visit someday. Now that you’re back state-side, what projects are you working
on at NTI?

I think one of the
areas of growing interest that NTI is focusing on is the future of the international
nuclear safeguards regime. It’s an incredibly important topic because it serves
as the assurance to countries that nuclear programs are being used for
exclusively peaceful activities. The IAEA, the International Atomic Energy
Agency, has been doing this work for many decades and by and large been very
successful, but NTI is focusing on making sure that the safeguards system
remains top notch. We’re examining areas for improvement, areas for innovation,
and opportunities to use new technology and techniques.

So that’s an area
that we’ll be doing some more research on, doing some more examination into
that field and to see what more we can do.
Safeguards issues are very intimately tied up with some of the most
well-known country-specific situations right now, including those in Iran and
North Korea. So I will continue to follow both of those topics, both of which I
worked on extensively in government and trying to find ways to be helpful in
the dialogue on those issues. I would like to find opportunities for us to help
prevent the worsening of those situations and bring them to a place where there
is assurance that all nuclear activities are for peaceful purposes.

So, besides being incredibly accomplished professionally, I
hear you’re a Jeopardy champion, too. What was that like?  How did you do?

That’s
is true, I was on Jeopardy.  Actually,
the story is funny because it starts in China.
I had auditioned while I was still a grad student and it took about a
year before they called me to say I could be on the show.  In the year that passed, I had graduated from
grad school, started at the State Department, and was living in Beijing at that
time.  I got a phone call at about 3:00 a.m. China time, and I thought it was a wrong number. 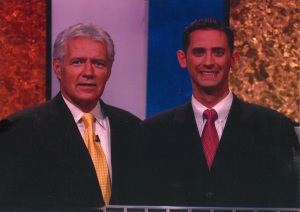 I
woke up very groggy and answered the phone, and this very energetic gentleman
was on the other line and said, “Hi, it’s Robert from Jeopardy.  Do you want to come to LA and be on
Jeopardy?”

That must’ve felt so surreal!

I remember thinking, is this a dream?  Am I awake?  I had tried out once or twice before.  I grew up in Southern California, and it’s
very easy when you live there to try to get on a game show, but in this case
they called me and said that I had passed all the required tests and auditions,
and so I flew to LA, which is also where my family is, so it was a nice — even
if I lost the show, I at least had an excuse to see my family, but I actually
won! I won one show, and I lost the second day by $2.

Wow, that’s amazing!
What an accomplishment.

Yeah, it was a lot of
fun.  The only bad thing that happened
was the next day, I watched the show that I would have been on if I had won a
second time, just out of curiosity of how might I have done… and in Double
Jeopardy one of the categories was Korea.

I started screaming in my apartment going, “No!”  Some of the questions didn’t even get
answered.  And I said, “oh, gosh, I know
all of these!” But it was fun. One
interesting memory I have is at the end of the show that I won, I had been
introduced to Alex Trebek as a State Department employee, and he asked, “What
do you work on at the State Department?”
And I said, “Well, I work on North Korea.”  And I learned that Alex Trebek is actually
very engaged on these issues and really knew a lot about the subject, and it was
just a fascinating reminder that everybody is interested to a certain extent in
these issues — even famous game show hosts.

We should invite him
to NTI sometime – maybe you could offer to write a couple double jeopardy
questions on verification. My last question is, if you had to cast someone to
play you in a movie about your life, who would you chose?

I know that during
the Iran nuclear negotiations that there was a lot of talk about who might play
whom in the movie. I won’t say who just to not embarrass anybody, but there
were some very good recommendations.
I’ve had several people say that I have a resemblance to either Jake
Gyllenhaal, though I don’t have his muscles, or John Krasinski. So, I would be
fine with that, but if they’re going to make a movie about me, I don’t know how
interesting it would be.

I’m sure the screenwriters
will make it as dramatic as possible.

Yes, exactly.  I would be negotiating nuclear deals by day
and solving murder mysteries at night.

Nickolas Roth, senior director for NTI’s Nuclear Materials Security program, explains what happened at the Zaporizhzhia nuclear power plant that terrifying night, what could have happened, and what the long-term implications are for nuclear security and nonproliferation efforts around the world.