In late August I made my first ever visit to the city of
Hiroshima.  As a student of nuclear
weapons, I had been wanting to make the trip ever since reading John Hersey’s Hiroshima as a college student.  In the book, Hersey graphically recounted stories
from survivors of the first use of an atomic bomb on August 6th,
1945.  His detailed narrative of the
horrific consequences of the attack made an outsized impression on me and played
an important role in motivating me to find a way to prevent nuclear weapons
from ever being used again.

My limited understanding of the city was further informed by
numerous WWII-era photos of the immediate aftermath of the attack – Hiroshima
as a blackened, smoldering wasteland with buildings reduced to rubble.

Given my dated reference points, I was unprepared last month
to discover a city of stunning beauty, built on the delta of an inland sea,
filled with many small islands, all surrounded by lush green mountains.  The WWII-era photos captured none of the serene
beauty of Hiroshima’s natural setting.  Of
course I knew that the city had been rebuilt after the war. Hiroshima’s rebirth
into such a vibrant, modern, thriving city today is a testament to the
resilience and hard work of its people.  But
the Eden-like beauty of its natural surroundings felt incongruous to me after
so many years of envisioning this city as hell frozen in time.

Even more impressive than the physical rebuilding of the
city are the efforts of its leadership to ensure that nuclear weapons are never
used again.

One such leader is Hidehiko Yuzaki, the Governor
of Hiroshima Prefecture, the state in which Hiroshima city is located. 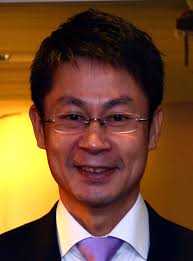 Governor
Yuzaki has steadily increased the role of Hiroshima Prefecture over the last
several years in leading international discussions on nuclear threat reduction
and disarmament and in stimulating international cooperation to prevent the use
of nuclear weapons.

His invitation to participate in a roundtable discussion was
the reason for my visit to Hiroshima.  The
Governor brought together a group of global experts to explore ideas for
reducing the nuclear threat in North Korea, as well as for moving nuclear
weapon states away from the practice of relying on the threat of use of nuclear
weapons (nuclear deterrence) for their security.  Both topics generated a spirited debate and
exchange of ideas about the best way forward.
The second topic in particular – the relationship between nuclear
deterrence and disarmament – raised open questions about the ongoing
credibility, effectiveness, and desirability of nuclear deterrence in a world
where new technologies (like cyber), irrational actors, and increasing risks of
miscalculation and technical failure all increase the chances of nuclear weapons
use.

A key finding of the roundtable experts was that it’s time
to undertake a realistic reexamination of nuclear deterrence as a sustainable
foundation for our security.

Questions about the credibility of nuclear
deterrence as a sustainable and effective security strategy are gaining
currency.  Among other things, nuclear
deterrence has come under increasing scrutiny by advocates of the Treaty to
Prohibit Nuclear Weapons, and other leaders who have led in rebuilding an
understanding of the dire humanitarian consequences of nuclear use. 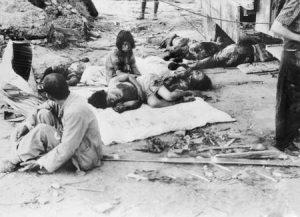 How
could it possibly be consistent with international laws of armed conflict, they
ask, to use a weapon that does not discriminate between civilians and
combatants, and that causes damage and suffering far beyond the intended
military target and that may not even be necessary to achieve the military
objective?

Is it moral to threaten the use of such a weapon to prevent
its ultimate use?  How realistic is it to
expect that these weapons will never be used, on purpose or by accident, if we
keep them indefinitely deployed and ready to use in large numbers?

Our proximity to the consequences of nuclear use in
Hiroshima sharpened our focus on these fundamental questions.  In Hiroshima, nuclear use is not academic,
it’s personal.  While the number of
atomic bombing survivors (Hibakusha) is rapidly dwindling, there is still a
visceral understanding of the bomb.
Today’s “Hiroshimans” have learned directly about the inhuman
consequences of nuclear use either through direct experience, or from the stories
of parents and grandparents who survived the attack.  Together with Nagasaki, the people of these
two cities occupy the unique ground of physical, personal and experiential
understanding.

Hiroshima has done a wonderful job of building a beautiful
and fitting memorial to the tens of thousands of lives lost during the attack
of August 1945.  What was once shattered
earth is now the Peace Memorial Park and Museum.  The tree-lined park sits just below the nexus
of two rivers in the heart of the city, at the epicenter of the detonation that
instantly eliminated the then-bustling business and industrial district located
there.  Walking paths cut through the
park, as well as small pavilions, sculptures and a memorial that contains the
names of the victims of the attack along with the inscription, “Let all the
souls here rest in peace for we shall not repeat the evil.”  Benches along the paths give visitors a place
to rest and reflect.

The iconic and haunting skeleton of the Genbaku Dome
building (the ruins of Hiroshima Prefecture’s former Industrial Promotion Hall)
sits just across the river and looms as a reminder of the devastation.  The Peace Park is, in fact, quite peaceful
and succeeds in inviting contemplation of existential questions about life,
sudden death, lingering death, war, the resilience of the human spirit, and
fundamental values around human dignity, rights and morality that are at the
core of what it means to be human.  There
is a palpable sense of the horror and anguish of the attack in this park but
also of the triumph of hope and life.

On the other hand, the Peace Museum (which sits within the
Park) invited many of the same questions, but it is far from peaceful.  The images, artifacts, and videos of the
immediate aftermath of the attack are disturbing.  There are powerful first-hand stories of
survivors on video. There is no way to “dress up” the horrors of a nuclear
detonation, and one is left wondering how it is that 73 years after the attack
on Hiroshima, we have made so little progress in eliminating the threat that a
nuclear weapon could be used again?  Against
that backdrop, a display on the history of arms control left me with a depressing
sense of the glacial pace of progress in constraining nuclear dangers.

One set of images from Hiroshima is particularly
searing:  photographs of the shadows of
people and objects that were burned into concrete by the flash of light and heat
of the bomb.  Like photo negatives,
images of objects and people were etched instantly into the surfaces
surrounding them even as the living entities disappeared into those shadows at
the same instant.  One of the most famous
is known as “the nuclear shadow of death” – the shadowy image of a person
sitting on the steps of a bank when the bomb hit. Over time, those shadowy
images have gradually disappeared, erased by nature’s gentle scrubbing from
rain and wind.

The remaining human witnesses, and their voices, are also
gradually disappearing into the shadows and beyond.  I can’t help but wonder, how do we keep the
knowledge of nuclear consequences alive, current, and urgent long enough to ultimately
eliminate the threat of nuclear weapons?

Hiroshima’s people help show us the way and provide
tremendous inspiration.  They have shown
us how to bear unimaginable suffering and yet hold onto the hope and belief in
the future that was needed to rebuild; they continue to bear witness to the
consequences of nuclear use to inspire progress toward nuclear disarmament; and
through their political leadership, they are working to project the lessons of
their experience internationally to ensure that “we shall not repeat the evil.”
We should all learn from Hiroshima, before it’s too late.

Read the Chairman’s Statement of the Hiroshima Roundtable here.

Command and Control to air on PBS on Jan. 10

Command and Control to air on PBS on Jan. 10

Command and Control to air on PBS in early 2017