This post was
written by Madison Estes, an intern with
NTI’s Materials Risk Management program. Madison is a graduate of the University
of Texas with a major in International Relations & Global Studies, and she
has a master’s degree in Non-Proliferation and International Security from King’s
College London.

Considerably more widespread than nuclear
materials, radioactive sources used for medical, industrial, agricultural,
research and other purposes can be found at thousands of sites across more than
150 countries. Due to their diverse physical properties, applications and
operating environments—and the possibility that they can be stolen and used to
build radioactive “dirty bombs”— radioactive sources used for beneficial reasons
also present a complex security challenge for the organizations and businesses that
use them, as well as for governments.

Each year, the International Atomic Energy
Agency (IAEA) records dozens of incidents in which radioactive materials have
been recovered from outside of regulatory control. The IAEA’s Incident and
Trafficking Database reports incidents of sources being stolen by insiders and
external adversaries for reasons that have included revenge, disgruntlement,
and financial gain. Sources also have been trafficked across international
borders by criminal networks and others. Experts believe it is only a matter of
time before a radiological source is used by a terrorist organization to build
a bomb that could cause enormous damage and terrorize a city.

To address the threat, NTI and the Moscow-based
Center for Energy and Security Studies (CENESS), in cooperation with the
International Atomic Energy Agency (IAEA), the Government of Canada, and the
Republic of Kyrgyzstan, recently hosted a two-day workshop in Bishkek,
Kyrgyzstan focused on strengthening radiological security in Central Asia.

Held in the village of Koi-Tash, a rural community nestled in the Tian
Shan mountains on the outskirts of the capital city, the workshop brought
together more than 70 stakeholders representing all five of the Central Asian
republics as well as representatives from the IAEA, Canada, the United States, the
Russian Federation, the Eurasian Economic Commission, and other institutions
and organizations. 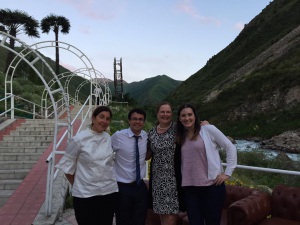 The group also was diverse in expertise, with
experts in both radiological source security and the prevention of illicit
trafficking of nuclear and radiological materials.

The convening of these two separate but linked
communities, as well as international partners and relevant organizations, is a
model that NTI introduced the previous year at the
first regional workshop held in Astana, Kazakhstan.
Bridging these groups is critical to mitigating the threat of a radiological “dirty
bomb” as it allows for interactions between parties that do not routinely meet,
thereby increasing capacity for coordination and building a more comprehensive
security strategy within and between governments.

“This model not only enhances awareness of
work being done by regional governments and international partners in Central
Asia, but it also provides unique opportunities for collaboration and donor
assistance,” said NTI Senior Consultant Ioanna
Iliopulos. “I learned more from the two-day NTI-CENESS
workshop on national and collective radiological and security prevention and
detections efforts underway in Central Asia than from my bilateral engagement
in this region that spanned over 10 years.”

NTI believes that this workshop model is
replicable and sustainable at the regional level and also at the international
level, as demonstrated by plans for the “International Conference on the
Security of Radioactive Material: The Way Forward for Prevention and Detection”
to be hosted in December 2018 by the IAEA in Vienna. Participants at the
Bishkek workshop were strongly encouraged to continue the conversations and
work initiated in Kyrgyzstan by attending the IAEA conference in December.

Addressing the security of radioactive sources
in Central Asia also presents an opportunity for U.S.-Russia cooperation on an
issue of mutual interest. “Finding areas of common ground and creating fora for
U.S. and Russian representatives to have a dialogue on those areas is a
common-sense approach to rebuilding trust and renewing cooperative engagement
between the United States and Russia,” said NTI’s Leon
Ratz, who helped organize the Astana and Bishkek
workshops. “This workshop demonstrated that such an approach is not only
viable, it can also yield productive results for all involved parties.”

NTI gratefully acknowledges financial support from
the Government of Canada for this workshop.

What are Frank and Claire Underwood Doing Underground in Episode 7 of House of Cards’ Season 5?

What are Frank and Claire Underwood Doing Underground in Episode 7 of House of Cards’ Season 5?

What are Frank and Claire Underwood doing Underground in Episode 7 of House of Cards season 5?