NTI Seminar: Impressions and Implications of the Iran Nuclear Archive

This post was written by Edwin Kindler, an intern working with NTI’s International Fuel
Cycle Strategies program. Kindler is a graduate of the Department of War
Studies at King’s College London, where he received a Master of Arts degree in
Non-Proliferation and International Security. He also holds a Bachelor of
Science in Diplomacy and International Relations from Seton Hall University.

In April 2018, Prime Minister Benjamin Netanyahu of Israel
unveiled what he claimed was a secret Iranian nuclear archive, obtained by
Israeli intelligence operatives from a warehouse on the outskirts of Tehran.
Allegedly, the Israeli team had managed to remove approximately 20 percent of the
archive but felt confident that they had removed a representative sample, as
many of the documents were overarching and offered a view into Iran’s entire
nuclear program.

Nine months later, in January 2019, Dr. Matthew Bunn and
Rolf Mowatt-Larssen led a team of nuclear and intelligence experts from Harvard
University’s Belfer Center to Israel. They had been invited by the Israeli
government to review the documents and electronic media seized during the raid
on Iran’s secret warehouse, and they published a paper on their findings in May
2019. 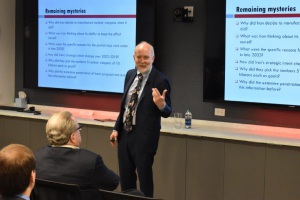 Last month, the Nuclear Threat Initiative invited Bunn and
Mowatt-Larssen to discuss their trip and paper, as well as implications of the
archive for policy makers, at an NTI Seminar.

Bunn and Mowatt-Larssen were clear up front about the
limitations of their visit. Although the Harvard team was allowed to view
several original documents, they brought no authentication experts with them,
and most of the documents were copies. Additionally, the Belfer team did not include
Farsi speakers or translation experts, so they were reading translated copies
provided by their hosts. Though this could cause concern over the objectivity
of the materials, team members agreed that many of the basic facts that they
knew about the Iranian nuclear weapons program prior to their trip were
reflected in the documents they saw, which gave the archive credibility. Lastly,
they noted that the team included both skeptics and supporters of the 2015 Iran nuclear agreement.

The Harvard team concluded that Iran’s technical
progress was much further along than publicly understood. According to the
archival documents, although Iran was still quite far from commercial-scale
highly enriched uranium production, it had access to multiple foreign weapon
designs and was assisted by several foreign advisors in ways beyond was publicly
known. 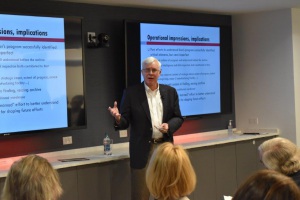 The team also found plans to begin construction of
manufacturing facilities for uranium metal components in the archive. In addition, there was a much more focused effort to pursue a nuclear weapons program than the Belfer team previously had understood.

According to the archives, the program was known and directed at a high level,
including by a council that (at the time of approval) included Hassan Rouhani,
now president of Iran. It also had specific funding. Taken together, these
factors indicated to the team that the program went beyond the 2011 International
Atomic Energy Agency (IAEA) report that the Iranian nuclear-weapons related
activities “took place under a structured programme.”

According to the information reviewed by the team, the
Iranian archive had been compiled and stored around the time of the completion
of the Iran nuclear agreement. The team assessed this to mean that Iran may
have greater capability to reconstitute its program than previously thought.

The IAEA was frequently mentioned in the
archive, and documents relating to the IAEA were specifically color-coded.

Among other things, these documents referred to potentially
concerning scenarios, including alleged instances where Iran acquired
foreknowledge of IAEA inspections prior to 2003.

One of the largest open questions is whether the documents
provide a full picture of the Iranian nuclear weapons program. According to the
Israelis, a second warehouse contained physical materials and equipment from
the program. However, the Iranian government has denied that a second warehouse
exists. When IAEA inspectors visited the alleged location, they did not find
any equipment or materials, although there is evidence that some items were
removed from that warehouse following Prime Minister Netanyahu’s announcement
that Israel had documents from the archive.

At the NTI seminar, Bunn and Mowatt-Larssen emphasized that after
reviewing the information they were given, their team was convinced that the
archive was legitimate. However, they were also clear that the documents only
referenced a limited period of time ending in the mid-2000s.

Finally, the team did not find that the new information in
the documents should lead to any specific course of action. However, it raised several
questions for policy makers going forward, including: How did Iran plan to keep
its program secret as it progressed? Why did the program stop? And has the
strategic intent of Iran changed since 2003, especially given the existence of
this archive?

For more on the Iran Nuclear Archive, read the commentary by NTI Co-Chair and CEO Ernest J. Moniz and NTI Board Member Elizabeth Sherwood-Randall.

On October 27, 2022, the Biden Administration released its Nuclear Posture Review, a document long-awaited by U.S. nuclear policy experts and the international community. Though the administration began crafting the NPR early in Biden’s term, the document’s relevance has been magnified by the heightened nuclear risks facing the world.