As Russian Foreign Minister Sergei Lavrov arrives in
Washington to meet with President Trump and Secretary of State Rex Tillerson, tensions between the
world’s two largest nuclear powers remain high, thousands of nuclear weapons
remain on hair trigger-alert, and the risk of nuclear miscalculation or
accident continues to represent a real and present danger that must be
addressed.

Though the crises in Ukraine and Syria demand attention and
action, so do several areas of existential common interest – including
prevention of nuclear miscalculation and catastrophic nuclear and radiological
terrorism. NTI has recently published several reports, policy papers, and blog
posts that provide recommendations on how to address these common challenges.

Here is a snapshot of NTI’s latest recommendations and
resources on U.S.-Russian relations: 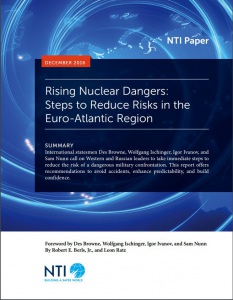 These measures include: an agreement to require all military aircraft
to fly with transponders turned on; restoration of NATO-Russia
military-to-military communication; transparency measures related to deployment
of nuclear-capable ballistic missile systems and missile defense systems in
Europe;

reduction of notification thresholds for all military exercises; and a joint reaffirmation at the highest political levels that “nuclear war cannot be won and must never be fought.”

Pathways to Cooperation: A Menu of Potential
U.S.-Russian Cooperative Projects in the Nuclear Sphere. This report
advances 51 potential projects for mutually-beneficial cooperation between the
United States and Russia on a range of thematic areas, including nuclear
security, nuclear safety, nuclear science, nuclear energy, and nuclear
environmental remediation. 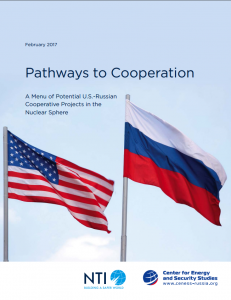 Among the recommendations are a new U.S.-Russia Initiative to Prevent
WMD Terrorism; development of proliferation-resistant nuclear fuels; improvements
in safety and reliability of nuclear reactors;

and best practice exchanges regarding nuclear environmental remediation (all the more important given the recent nuclear emergency at Hanford).

Not One-Sided: The Many Benefits of the New
START Nuclear Arms Reduction Treaty. This blog post outlines the
considerable value of the New START Agreement in ensuring predictability,
stability, and transparency between the United States and Russia – and calls on
the Administration to consider extension of the New START agreement as its
limitations expire in February 2021.

As Secretary Tillerson and Foreign Minister Lavrov consider the future
of the U.S.-Russian relationship, they should make sure that addressing weapons
of mass destruction and disruption remains a front-burner issue on the
bilateral agenda. Towards this end, they should consider the recommendations
listed above and establish a dedicated dialogue on nuclear risk reduction,
empowering relevant agencies to work on developing a strategy for threat
reduction on areas of existential common interest, including prevention of
nuclear miscalculation and prevention of catastrophic nuclear and radiological
terrorism.

It is only through dialogue and action that we
can achieve meaningful risk reduction on these existential challenges.

Taking a Page out of George Kennan’s Long Telegram

Taking a Page out of George Kennan’s Long Telegram

Taking a Page out of George Kennan's Long Telegram