You could hear the drone humming away over our heads. As I
glanced around, I saw the plainclothes police officers casually, yet
vigilantly, observing the operations, the surroundings, and us. Slowly,
carefully, a forklift lowered the research irradiator—a device about the size
of a filing cabinet—into the waiting transportation casket. Once the device was
securely tucked away, the workers swiftly put the lid on and tightened the
bolts. And just like that, it was over.

I had the rare opportunity earlier this year to
witness the removal of two radiation sources from Emory University Hospital
in Atlanta, GA. Research irradiators that contain these sources aren’t often visible to the public. They are
housed deep within hospitals and research centers, used primarily by technicians
sterilizing blood or equipment or by researchers conducting experiments. 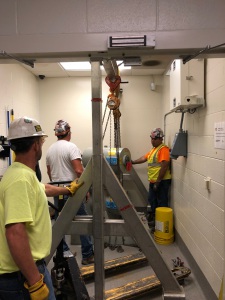 It
also was rewarding because I was watching risk reduction happen right before my
eyes. Cesium-137, the radioactive source used in the device, is a double-edged
sword. Used properly, it provides life-saving benefits to the public by
sanitizing blood and medical instruments, and it contributes to important
medical research. But it can represent a real risk to health and public safety
should the material be stolen by criminals or terrorists and used to build a radioactive
“dirty bomb.” 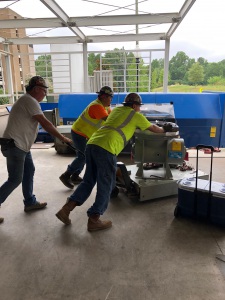 Because
the threat is urgent and a national effort is needed to address it, the Nuclear
Threat Initiative (NTI) has been working with institutions like Emory and with
state and local governments to reduce the risk.

Fortunately, new technologies have eliminated the need for certain
uses of radiological materials like cesium-137 in medicine and research;
equally effective and safe, these new technologies have been approved by the
Food and Drug Administration and have made their way to market. NTI’s work—with
Emory University in Atlanta, the University of California system, and New York
City—has shown that there is a path forward that reduces risks and costs for
everyone. A recent report published by NTI, Preventing
a Dirty Bomb: Case Studies and Lessons Learned, shares lessons
from those important efforts. You can read the report here,
and find more information about phasing out cesium-137 here.

At Emory, the radiation source removal reduced risks not
only for Emory but for the entire Atlanta region. It was a painstaking process,
a bit like watching paint dry. Everything was done … very … slowly, checked and
double-checked to ensure the safety and security of the operation. It took
hours for the rigging experts to prepare and hoist the irradiator for movement,
then carefully move the device from its bunker to the loading dock, and then
gently place it into the transportation container.

As the second device was removed, I was
impressed by the broad coordination and cooperation needed to make this
movement happen. In
a command center several buildings down from the removal, personnel from the city’s
police and fire departments, a national laboratory, Emory staff, and even the Atlanta-based
Centers for Disease Control and Prevention watched the movement from large TV
screens that covered a wall. Feeds came in from cameras monitoring the removal as
well as from the drone I heard above our heads earlier.

As the truck carrying the irradiator drove away to a “safe
harbor” overnight, the command center began to stand down. As TVs were turned
off one by one, the tension drained from the room. The team would gear up again
in the next day as the last two radioactive sources were removed and
transferred into the remaining transportation caskets, and the truck carrying
them would begin the journey to an undisclosed Department of Energy site for
safe disposal.

As
I left Emory that evening, I reflected that security done right often goes unnoticed. 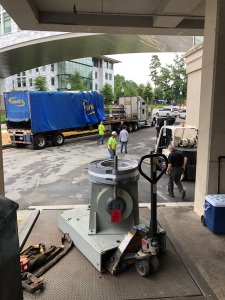 Most people at the hospital that day had no idea what was happening
in the delivery bay, and some may have been annoyed by the unexpected street
closure.

But by the end of the day, their city was safer. As part of NTI’s team
working to reduce radiological risks in the United States and around the world,
I was grateful for the opportunity to witness the irradiator removal and get a “behind
the curtain” view of how we can improve security for all.