Poland HEU Removal: Behind the Scenes

At the 60th International Atomic Energy Agency (IAEA) General Conference, U.S. Secretary of Energy Ernie Moniz announced the successful repatriation of 61 kilograms of Russian-origin highly enriched uranium (HEU) from the Maria research reactor in Poland. According to the U.S. Department of Energy (DOE), this most recent removal makes Poland the 31st country, plus Taiwan, to completely remove its HEU. It was the culmination of steady work that required eleven separate shipments over the course of a decade.  In total, over 700 kilograms was removed from Poland – enough for 28 nuclear weapons!

As the former Assistant Deputy Administrator for the DOE/National Nuclear Security Administration’s (NNSA) Global Threat Reduction Initiative (GTRI), I know first-hand the herculean effort that was required to safely and securely transport such as massive quantity of nuclear material from Poland to the Russian Federation over such an extended period.  The behind-the-scenes story involves remarkable cooperation between the NNSA, the Government of Poland, the IAEA, and the Russian Federation. In particular, the team at NNSA should be applauded for its efforts, particularly Sarah Dickerson, Director of Nuclear Material Removals, and Dr. Igor Bolshinsky, Program Manager for the Russian Research Reactor Fuel Removal Program.  They are the real heroes responsible for this remarkable achievement. 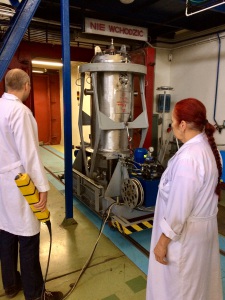 The nuclear fuel shipments began in August 2006 with the material that can most readily be used to make a nuclear weapon – what we call “fresh” or unirradiated nuclear fuel – and there were three shipments of this type of fuel from Poland over the 10-year period ending in September 2016. This was the most dangerous of the fuel removed, but the removals themselves were more straightforward.

To enable shipments of “spent” or irradiated fuel, the task is more complex. A research reactor must first be “converted” from the use of HEU to allow the use of low enriched uranium (LEU) fuel. In Poland, the Maria Research Reactor in Otwock-Swierk was first redesigned to use LEU fuel that could replace the existing HEU core. Once the necessary safety and licensing reviews were completed, the spent HEU fuel was discharged from the Maria research reactor and replaced with LEU fuel.

Because spent HEU fuel is highly radioactive, it typically requires two-to-three years of cooling before it can safely be transported in specially designed casks. Unlike fresh HEU fuel, which can be flown in a specialized Russian AN-124 cargo plane, spent fuel typically has to be transported by other means.

In Poland’s case, transporting the spent HEU fuel back to the Mayak facility in Russia required a complicated route across 1,600 miles of land and water and across several international borders.

For several of the spent HEU fuel shipments, the NNSA team developed creative alternatives: the spent HEU fuel would be transported by vehicle from the Maria research reactor to a nearby train station; a secure train would then transport it under heavy guard to the Polish port of Gdynia on the Baltic sea; the spent fuel would then be placed on a special vessel and transported by sea around Norway to the naval port of Murmansk, Russia. Upon arrival at Murmansk, the spent fuel containers would be loaded onto a train and transported to the closed Russian nuclear city of Ozersk, Russia, also known at Mayak.  This approach was used five times to transport approximately 450 of the more than 700 kilograms of HEU.

To accelerate HEU nuclear removal efforts following President Obama’s call for countries to eliminate their stocks during his April 2009 Prague speech, the NNSA team developed a new, innovative approach to safely and securely transporting the spent HEU fuel: instead of transporting nuclear material by sea vessel, they would transport the spent HEU fuel by aircraft! This had never been done before and required extensive testing and evaluation by multiple organizations.  In close coordination with their Russian counterparts at both Rosatom and Sosny, the NNSA team first successfully used this new mode of transport to remove all spent HEU fuel from Romania. It was used in Poland for the first time in September 2016 and allowed the material transit time to be reduced from more than a month to one day.

For the final removal operation announced by Secretary Moniz at the IAEA General Conference, the spent HEU fuel was loaded in 17 Russian TUK-19 specialized spent nuclear fuel transportation casks, and the casks were placed into six special International Standards Organization (ISO) containers.  The nuclear material was then transported to the Gdansk International Airport where it was airlifted under guard to a secure facility in Russia using an AN-124 cargo plane.

As Senator Nunn noted, the Government of Poland should be congratulated for its long-term commitment to removing all its HEU over a 10 years. Poland already ranked well for its security efforts in the 2016 NTI Nuclear Security Index, where it was among the top 10 countries with weapons-usable nuclear materials. In the next edition, it will move to the rankings for countries without weapons-usable nuclear materials.

In addition, the IAEA and Russian Federation should be commended for their cooperation, and the NNSA team, headed by Sarah Dickerson and Igor Bolshinsky, deserve special thanks and praise for their innovative and dedicated efforts to remove dangerous HEU from Poland and numerous other countries as well.