Connecting the Pillars of the NPT: Multilateral Disarmament Verification and Non-Proliferation

Connecting the Pillars of the NPT: Multilateral Disarmament Verification and Non-Proliferation

This new NTI Paper, Connecting the Pillars of the NPT: Multilateral Disarmament Verification and Non-Proliferation, is a unique analytical contribution that explores the juxtaposition of NPT disarmament obligations and verification challenges. Authors Corey Hinderstein and Lars van Dassen address key questions and posit that non-proliferation and disarmament efforts can be reinforcing and not contradictory, especially regarding verification. 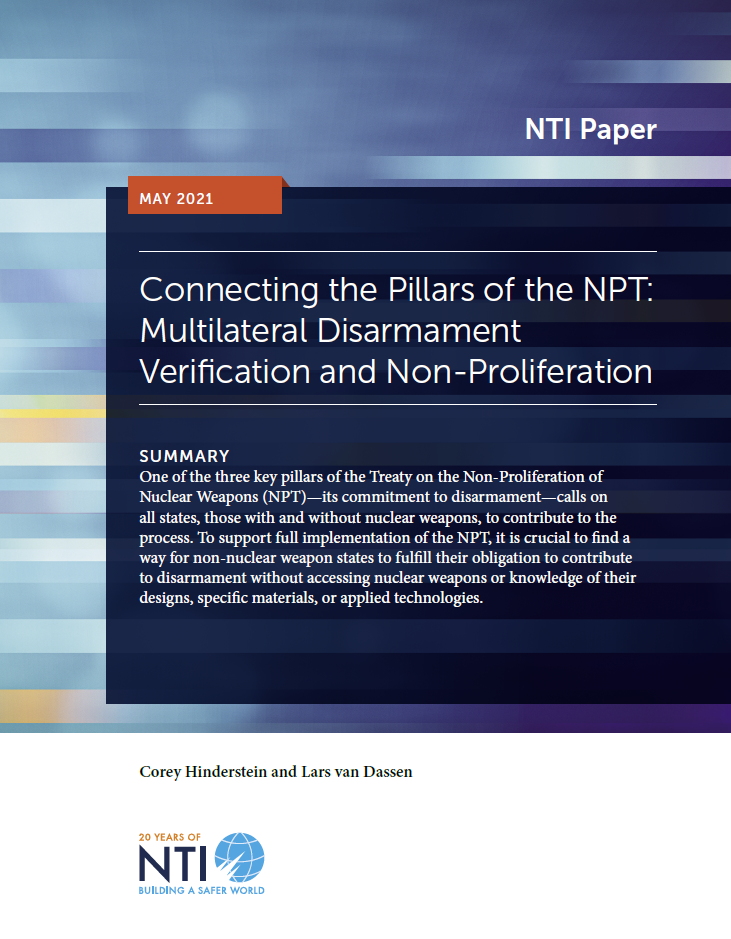 Lars van Dassen is the Executive Director of the World Institute for Nuclear Security (WINS). Prior to joining WINS on January 1, 2021, he was Director of the Office for International Relations at the Swedish Radiation Safety Authority (SSM). In this capacity, he participated in the Quad Nuclear Verification Partnership and International Partnership for Nuclear Disarmament Verification.

This paper was generously supported by the Swedish Radiation Safety Authority (SSM).

NTI Co-Chairs Ernest J. Moniz and Sam Nunn call on the United States to resume a position of global leadership to reduce the risks posed by nuclear weapons.

This paper was written as a part of an effort by the Working Group on an Expanded Nonproliferation System. The group was jointly established by CSIS and the Nuclear Threat Initiative to bring about more complete participation by India in the nonproliferation system, and it included experts in international nuclear affairs and in foreign policy from both India and the United States. The group advocated for Indian membership in export control groups.