Get to know NTI: Martin Rioux-Lefebvre

How did you get into the field of nuclear security?
Perhaps surprisingly for people working with us in the field, I have a background in East Asian studies and history. My original academic interest focused on the Chinese revolution and Japanese imperialism, but when I started graduate school, I went more into contemporary topics, and I did Asia-Pacific Policy Studies with a concentration in security. My graduate thesis supervisor was a specialist on North Korea, and I started working on the DPRK’s  nuclear program. That was just a few months before North Korea conducted its second nuclear test – and that event brought me to the CTBTO (Comprehensive Nuclear-Test-Ban Treaty Organization), where I worked for a year, and then to the IAEA (International Atomic Energy Agency), where I worked for the next four. The DPRK and nuclear tests brought me into the field, and I still have an interest in that, so whenever I’m in a meeting and the topic of North Korea comes up, my eyes light up.

What did you do after grad school?
I was first at the CTBTO for almost a year, where I worked on the International Scientific Studies project, and then at the IAEA from 2010-14. I spent two years in the Department of Safeguards, working for the Deputy Director General. I conducted research and provided analysis in support of senior leadership and investigated potential violations of non-proliferation obligations … Then I moved to the Division of Nuclear Security for two years, and I worked mostly on illicit trafficking. I was the officer in charge of the Incident and Trafficking Database, which people in the field would know.

After that, you moved back to Canada and went into private business for a time. How did you end up in Washington at NTI?
NTI is a leader in the field , and I was familiar with the security index (NTI Nuclear Security Index) when I was at the IAEA. [After working in business development for a year or so], I realized that I missed international work, and I missed diplomacy, and I really liked the nuclear sector.

Talk about your work at NTI.
The main project I work on is the IPNDV (International Partnership for Nuclear Disarmament Verification). This is a years-long public-private partnership between NTI and the State department, along with 28 other countries, and we look at the major technical challenges that exist in nuclear disarmament efforts across the nuclear weapon lifecycle, from the mine to the disposition of nuclear materials. 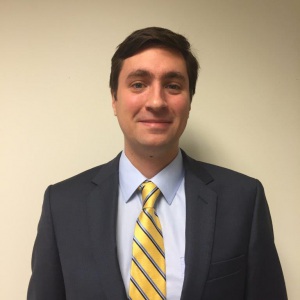 I also use my IAEA experience to provide technical and strategic guidance on the implementation of radiological security efforts.

How do you pronounce your name?

Martin REE-oo Le-f-ah-v. I think Americans tend to pronounce it “Roo” because it looks like Sioux Falls.

Why is there a Cheesehead in your office?
The Green Bay Packers is my favorite sports team, and I follow them assiduously.

But you’re Canadian.
Yes, but I don’t like hockey.

I heard that you used to host football-watching parties when you were working in Europe.
I had the NFL Game Pass on my iPad and watched it late at night. And I tried to host Super Bowl Parties.

Did a lot of people come?
No. I like to think it’s not because I’m bad company but because the games started after midnight. It was mostly a solo affair.

Celebrating the History of Nuclear Safeguards and Imagining The Future

Celebrating the History of Nuclear Safeguards and Imagining The Future

NTI played a prominent role in this year’s IAEA Symposium on International Safeguards. Learn more about our what our experts were up to through this photo blog.