On August 18, 2016, news outlets around the world reported that the United States had removed its tactical nuclear weapons from Incirlik Air Base, Turkey, and diverted them to another NATO ally, Romania. The news was shocking. Although the United States stations several hundred nuclear gravity bombs on the territories of five NATO allies, altering their basing arrangements would be an immense technical, diplomatic, and political undertaking. As they say: big, if true.

But the story was not true; it was “fake news.” Fake news has come to mean many things, from political satire to news coverage that political leaders deem to be slanted or unfavorable. The story about U.S. nuclear weapons being transferred from Turkey to Romania was an example of a specific sort of media manipulation: the deliberate planting of false stories, usually by a government entity, for propaganda purposes. This tactic is a form of “disinformation,” a term whose origins trace back to Soviet intelligence operations during the Cold War. [1] Skimming even a few historical examples shows that nuclear weapons and other weapons of mass destruction have often been the subject of disinformation operations.

The 2016 story of the U.S. tactical nuclear weapons redeployment that never happened illustrates how this disinformation dynamic works in the digital age. 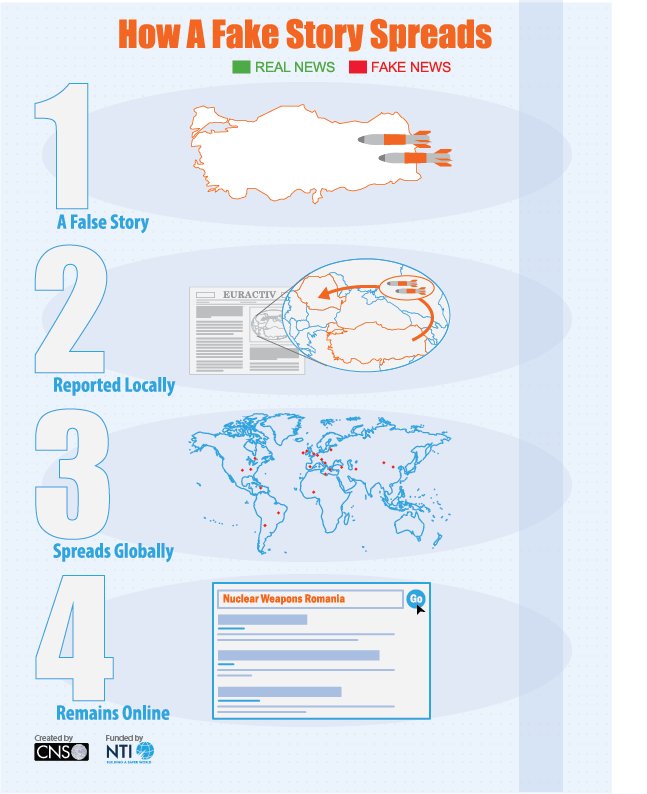 Step 1: Make up a Plausible Story

Not all fake stories make for good disinformation. Very few publications have picked up on the “Bat Child Found in Cave” story. [2] A good piece of disinformation uses fabrication to advance the interests of a state or other powerful entity, and will be well-timed to correspond with actual events, discussion, and commentary. In the days leading up to the fake news about the United States pulling its tactical nuclear weapons out of Turkey, numerous experts argued in op-eds, including one on the NTI website, that in the wake of Turkey’s attempted coup U.S. nuclear weapons should no longer be stationed in the country, where their security might be at risk. [3] This genuine policy discussion lent a veneer of plausibility to a concocted story claiming the weapons had been removed. WMD issues also present an appealing target of opportunity for fake news disseminators, as official secrecy often prevents governments from confirming or denying the stories, as also happened in this case.

A good piece of disinformation needs an appropriate media outlet. State-run outlets are not the ideal choice to break the news, as their proximity to government interests undermine their credibility with foreign audiences. The best sources are those with no official state sponsorship, as they at least appear independent. When the Soviet Union planted a story about HIV being a U.S. biological weapon in the early 1980s, it did so in an obscure Indian newspaper. A widely-reported piece of fake news in February 2017 about the deployment of a new Chinese ICBM, the DF-41, apparently had its origins in a French blog post. [4] And the news about the redeployment of U.S. tactical nukes from Turkey to Romania was “broken” by Euractiv.com, a Brussels-based news site which publishes in multiple European Union languages.

Step 3: Wait for the Story to Spread Globally

While state-run media is a less than ideal match, it provides great kindling to spread fake news. Immediately after the Euractiv story broke, the Russian government-controlled news agency Sputnik News ran multiple articles parroting it. From there, the story spread throughout media outlets around the world. The proliferation of online news and social media platforms has accelerated the spread of information considerably. During the Cold War, disinformation operations often required months or years to bear fruit. For example, the false claim that AIDS was a U.S.-engineered bioweapon was first planted in an Indian newspaper in 1983, but did not emerge in the state-controlled Soviet press until late 1985. [5] Today, it only takes a matter of hours for fake news to spread around the world.

Step 4: Benefit from the Fact Your Fake Story Never Fully Goes Away

In the pre-internet age, disinformation was often contained to obscure publications without major readership numbers, but the modern equivalents of those publications can now be read by millions. Google’s search algorithm, which decides the order of search results, heavily weights links back to an original source. The network of sites and link-backs therefore function as a kind of “Google bomb” to amplify the reach and persistence of fake news stories, despite any efforts to debunk them.

Let’s say a reference to the U.S. moving its nukes from Turkey to Romania appeared on your Twitter feed or on a friend’s Facebook page. You might be curious enough to do a little research to see if there was anything to it. So you’d open up a new tab, type “Romania nuclear weapons” into Google search, and find as the very first search result—the fake news story. Sure, further down the list of search results, there are some denials and debunkings, but they are well outnumbered by the fake news, and they lack privilege of place at the top of the results. [6]

The dangers of disinformation and fake news go beyond confusing the public and muddying debate. National decision makers can fall victim to falsified information, too. For instance, on December 23, 2016, the Defense Minister of Pakistan, a state possessing nuclear weapons, tweeted a nuclear threat against Israel, another nuclear-armed state:

He did so in response to an obviously fabricated article on the site awdnews.com, which claimed that the Israeli Defense Minister (who was misidentified in the article) had threatened Pakistan with nuclear retaliation in the event of Pakistani intervention in the Syrian Civil War. Thankfully, the incident was smoothed over, and the Pakistani official deleted the tweet. However, if a similar incident happened during a diplomatic crisis or a nuclear standoff, the results could be disastrous.

As policymakers become more reliant on social media and online news sources, they are increasingly vulnerable to fake news, including disinformation deliberately planted and cultivated by foreign adversaries. When dealing with weapons of mass destruction, believing fake news could have very real—and catastrophic—consequences.

The Korean Peninsula is one of the most volatile and heavily militarized places in the world, carrying tremendous risk of conflict and the potential for catastrophic nuclear exchange.

Was Libyan WMD Disarmament a Significant Success for Nonproliferation?

Was Libyan WMD Disarmament a Significant Success for Nonproliferation?

Libya's decision to renounce its WMD programs, a resounding success for the nonproliferation regime. (CNS)

Global Partnership Against the Spread of Weapons and Material of Mass Destruction will build upon programs such as Cooperative Threat Reduction. (CNS)

Tactical nuclear weapons
Short-range nuclear weapons, such as artillery shells, bombs, and short-range missiles, deployed for use in battlefield operations.
North Atlantic Treaty Organization (NATO)
The North Atlantic Treaty Organization is a military alliance that was formed in 1949 to help deter the Soviet Union from attacking Europe. The Alliance is based on the North Atlantic Treaty, which was signed in Washington on 4 April 1949. The treaty originally created an alliance of 10 European and two North American independent states, but today NATO has 28 members who have committed to maintaining and developing their defense capabilities, to consulting on issues of mutual security concern, and to the principle of collective self-defense. NATO is also engaged in out-of-area security operations, most notably in Afghanistan, where Alliance forces operate alongside other non-NATO countries as part of the International Security Assistance Force (ISAF). For additional information, see NATO.
WMD (weapons of mass destruction)
WMD: Typically refers to nuclear, biological, or chemical weapons, though there is some debate as to whether chemical weapons qualify as weapons of “mass destruction.”
Deployment
The positioning of military forces – conventional and/or nuclear – in conjunction with military planning.
Biological weapon (BW)
Biological weapons use microorganisms and natural toxins to produce disease in humans, animals, or plants.  Biological weapons can be derived from: bacteria (anthrax, plague, tularemia); viruses (smallpox, viral hemorrhagic fevers); rickettsia (Q fever and epidemic typhus); biological toxins (botulinum toxin, staphylococcus enterotoxin B); and fungi (San Joaquin Valley fever, mycotoxins). These agents can be deployed as biological weapons when paired with a delivery system, such as a missile or aerosol device.
Intercontinental ballistic missile (ICBM)
Intercontinental ballistic missile (ICBM): A ballistic missile with a range greater than 5,500 km. See entry for ballistic missile.
Nuclear-weapon states (NWS)
NWS: As defined by Article IX, paragraph 3 of the Treaty on the Non-Proliferation of Nuclear Weapons (NPT), the five states that detonated a nuclear device prior to 1 January 1967 (China, France, the Soviet Union, the United Kingdom, and the United States). Coincidentally, these five states are also permanent members of the UN Security Council. States that acquired and/or tested nuclear weapons subsequently are not internationally recognized as nuclear-weapon states.