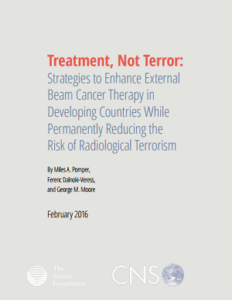 In the wake of the terrorist attacks of September 11, 2001, governments across the globe have shown increased concern that terrorists could gain access to high-activity radiological sources that could be used in dirty bombs. Despite efforts to increase their security and detect/prevent their smuggling, the problem has persisted because these radiological materials are in such widespread use in commercial applications across the globe. As a result, proposals to permanently reduce the risk by replacing the use of these materials with less dangerous alternatives have been gaining traction in the international community.

One of the more challenging cases of replacement is that of substituting cobalt-60 devices in external cancer radiation treatment in poorer countries where cancer treatment is grossly inadequate. This has been the case in Africa, a continent which has also seen a documented rise in terrorist activity.

On September 1-2, 2015, the Stanley Foundation and the James Martin Center for Nonproliferation Studies at the Middlebury Institute of International Studies at Monterey, with input from experts of the National Cancer Institute’s Radiation Research Program and the University of Witwatersrand, organized a workshop in Johannesburg, South Africa, to discuss ways for policymakers to reduce the threat of radiological terrorism while also trying to improve cancer care in Africa and other developing countries.

This report presents key themes of the discussion and provides actionable recommendations for the United States, other donor countries, and the International Atomic Energy Agency.

The full study is available for download in PDF format.

Tutorial on Nuclear and Radiological Security

Tutorial on Nuclear and Radiological Security