This post was written by Sylvia Mishra, a Herbert Scoville
Jr. Fellow working with NTI’s Global Nuclear Policy Program. Previously,
Mishra was a visiting fellow at the James Martin Center for Nonproliferation
Studies (CNS), in Monterey, Calif. She holds a Bachelor of Arts degree in
Political Science from Hindu College, University of Delhi, a Master of Science
in International Relations from the London School of Economics and Political
Science, and a Master of Arts in Nonproliferation and Terrorism Studies from
Middlebury Institute of International Studies.

Every year, the University of San Diego’s Institute
on Global Conflict and Cooperation hosts a Public Policy and Nuclear Threats
(PPNT) boot camp, a summer workshop-in-residence that offers participants a
platform to learn, understand and debate the future U.S. nuclear policy issues and
features lectures and discussions by leading policy and technical experts and
specialists. As a Scoville Fellow working at the Nuclear Threat Initiative
(NTI), I was selected to be part of the PPNT 2018. Here are some of my key takeaways
from the discussions.

Return of
great power competition: The World Economic Forum’s Global Risks 2018 report
highlighted that the intensification of nationalistic politics has impacted the
world’s major power relations. Increasingly, states are becoming more assertive
related to their own interests while consensus on a rules-based global order frays.
There is precedent for this trend. Throughout history, nations have clashed for
power, influence and dominance. Sometimes these struggles, as historian Hal Brands
pointed
out, have taken either the form of cold war, such as the US-Soviet
competition, or resulted in hot conflicts, from the Peloponnesian War between
Athens and Sparta to the world wars of the 20th century. In the
immediate post-Cold War era, the United States enjoyed a ‘unipolar moment’ and
was the unchallenged superpower. However, almost two decades later, the re-emergence
of Russia and China as leading foreign policy actors willing and ready to shape
geopolitical balances has brought great power rivalry back to the fore. US
security planners, as the Pentagon’s
National Defense Strategy states, believe that the central challenge
to US prosperity and security is the re-emergence of long-term, strategic
competition. Similarly, the Trump administration’s Nuclear Posture Review notes
that the United States must recognize the reality of a return to great power
competition and posture itself accordingly.

Nuclear
weapons are coming back into sharper focus: Nuclear weapons primarily have had a
deterrent role preventing armed conflict. In the post-Cold War era, however, the
principal nuclear threat emanated from concerns of “loose-nukes”
falling into the hands of non-state actors. In the last couple of
years, nuclear weapons-possessing states have begun developing new weapons and
modernizing their delivery systems. A nationalistic regime in North Korea is
developing and enhancing its nuclear and missile capabilities. Both
Russia and the United States are undertaking long-term programs to
replace and modernize their nuclear warheads, missile and aircraft delivery
systems. A new SIPRI
report indicates that in Southern Asia, China, India and Pakistan
are expanding their nuclear warheads and enhancing delivery platforms. Several
countries’ development of tactical nuclear weapons also has lowered the nuclear
threshold. While there is a strong taboo on nuclear use post-1945, expanding nuclear
weapons inventories only increases the likelihood of nuclear war.
Simultaneously it also increases the chances of miscalculation, accidental use
and inadvertent escalation.

Threat of nuclear
terrorism continues: Analysts across the globe agree that the threat of nuclear terrorism is
one of the biggest challenges facing the world today and countries should pay
greater attention to this problem. There are several reported incidents of
breaches of secured stockpiles of weapons-usable uranium and plutonium across
the globe. The James Martin Center for Nonproliferation Studies reports
that between January 2013 and June 2018, 870
incidents of nuclear or other radioactive materials outside of
regulatory control occurred in 51 countries. It is imperative that in the
absence of the Nuclear Security Summits (NSS), countries take a leadership role
to secure these materials from terrorist groups and other non-state actors. 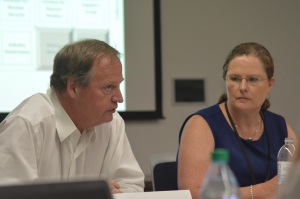 Former Summit Sherpa Laura S.H. Holgate, now NTI’s vice president for
Material Risk Management, at the HEU Symposium in Norway highlighted
that though considerable progress has been made in strengthening security of
nuclear facilities around the world, several challenges still persist.

For instance, countries still lack comprehensive
global inventories of civil HEU and there still are no binding international
standards for nuclear security. Owing to some of these challenges, and the
absence of an ongoing NSS process, greater attention needs to be devoted to the
careful and responsible management and stewardship of weapons-usable nuclear materials.

Growing divide
between deterrence and disarmament camps: While deterrence doctrines are
re-evaluated, there is demonstrably strong support for the disarmament agenda. This
growing dissonance between the proponents of deterrence and the disarmament
camp has led to the negotiation of a treaty banning nuclear weapons. There is a
strong polarization and hardening of positions between the non-nuclear weapons
states (NNWS) and nuclear weapon states (NWS).
There is an inherent frustration among the NNWS due to the sluggish pace of
disarmament efforts and lack of significant progress on the Article VI
commitment by the NWS. Given the
failure of the state parties of the Nuclear Nonproliferation Treaty (NPT) to
agree on a consensus Final Document at the 2015 NPT Review Conference, it is
important to build bridges between the two groups before the Review Conference in
2020. There is clearly a need
to convene dialogues between the key stakeholders of the divided groupings to
deconstruct the deeply engrained assumptions about nuclear weapons possession
and the role of nuclear weapons in security doctrines.

Emerging
technologies and cyber weapons: The advent of new technologies continues to foment
social change, offering unprecedented new possibilities. Major technological
shifts in the military realm have the power to transform the way wars are
fought. Development and innovations in artificial intelligence (AI), cyber, robotics,
autonomous weapons, 3D printing, and biotech among others have the potential to
augment changes to mobilization and application of force. Several of these
technologies can have applications in strategic missions and could act as
force-multipliers. As AI and other emerging technologies mature, legacy
platforms like Google, Facebook and Twitter would continue to play a role and
shape the way information is being disseminated. Against this backdrop, disinformation
warfare is increasingly becoming a reality. A Foreign Policy report
highlights how following the March nerve agent attack in the UK, stories from
RT and Sputnik (the major media arm of the Russian government) would appear on
the first page of Google search. It is essential to monitor these trends in the
field of emerging tech and cyber as the future of political warfare
increasingly involves new disruptive technologies.

The themes identified above were major sources
of discussion at PPNT, and it was noted by nearly every speaker there that the
themes cut across the need for diversity and including more women and young
professionals working on these issues. Dr. Bethany
Goldblum, the program director for PPNT boot camp, specifically works on
projects which give opportunities to women and young professionals from STEM
and policy field to work on these cutting-edge issues.