Beth Cameron is NTI’s new Senior Director for Global Biological Policy and Programs. Among other duties, Cameron will oversee the development of a Global Health Security Index, as well as work related to national security risks associated with emerging biotechnologies.

You’ve been at NTI just about a month now. Can you talk about what you were doing before you arrived?

Directly before I came to NTI, I was at the White House as the Senior Director for Global Health Security and Biodefense, and before that I worked in a variety of fields to bring together health and security, which is the space that I really like to work in – bringing those two communities together. I was at the Department of State and then the Department of Defense before coming to the White House.

So have you always worked in government?

No, prior to that, I was at the American Cancer Society working with advocates on policy and policy research. I also really like working in the non-governmental space, so I’m really happy to be back in that space now and able to contribute in a different way.

My background is actually in cancer research, so I’m a researcher by training. Then, after I got my PhD, I made the decision to work on Capitol Hill for a year on a congressional fellowship for Senator Kennedy, so that’s how I got interested in policy.

What were you working on most recently at the White House?

Most recently, we made a decision at the end of the Obama Administration to bring together all of the elements of the National Security staff that were working on biological threats, including homeland security issues, as well as national security issues, from biodefense to global health security. 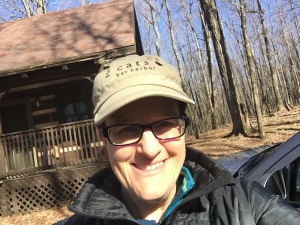 The idea was that by bringing together the people working on those issues, we would create an even more cohesive approach to our policies, and that was a decision made after the Ebola epidemic in 2014.

The result was very effective, and that strategy is actually being maintained by the new administration.

What kind of biothreats are we talking about?

So, biothreats of all kinds – from naturally occurring infectious diseases and pandemic threats, intentional and accidental biological events, and global health as a national security issue, which affects so many lives, populations, and  political stability and economic growth. I started at the National Security Council as the Director for Countering Biological Threats in the WMD, Terrorism and Threat Reduction Directorate, and the premise is that by bringing the community that works on naturally occurring diseases together with the community looking at intentional threats, we’re looking at the whole picture and are much more capable of preventing, detecting, and responding to whatever comes our way.

Many people remember the 2001 anthrax attacks, of course. What kind of bio threats should we be concerned about or are we looking at?

Well, biological materials are much more readily available than nuclear materials, and access to biological technology is increasing. This is incredibly important for the development of medical countermeasures, but it’s also a space where I think we need to pay close attention as a community. As the technologies become more and more pervasive, they may also become more attractive to groups that seek to misuse biotechnology. Looking at the increased use of chemical weapons, we want to prevent this from happening with biological agents. At the same time, we need to pay consistent attention to emerging infectious disease threats, and the good news is that capabilities needed for preventing, detecting, and responding to intentional, accidental, and naturally occurring disease threats are virtually the same. In every event, our goal is to avert catastrophic biological events and save lives.

What will you be doing here at NTI?

At NTI, I will be building and leading the biological effort, and NTI has a long history of addressing biological threats, a fact that is lesser known by our name, which obviously has nuclear in it — but our founding biological lead was Peggy Hamburg, who focused early on the importance of addressing biological issues at NTI and is a well-known and longstanding leader in the field.  NTI has focused heavily on the need for cross-border collaboration to address disease surveillance, and NTI engaged deeply on biological threats in the wake of the 2001 anthrax attacks in the United States.

I’m really looking forward to taking our work another step forward and am delighted that NTI has launched an effort to develop a Global Health Security Index, in partnership with the Johns Hopkins Center for Health Security and the Economist Intelligence Unit. It’s vital that countries have incentives to increase capacity and that the gaps are clearly understood so that sustainable investments can be made. We also seek to address and better understand risks posed by applications of accelerating biotechnology  — working closely with the innovators that are actually developing those technologies in the private sector. We will remain engaged with the Global Health Security Agenda. We were a founding partner in the Global Health Security Agenda Consortium, and we’ll continue that work. And then we’ll also continue to raise threat awareness and will continue to champion cross-border approaches – including with the Connecting Organizations for Regional Disease Surveillance (CORDS) initiative, which is an organization that NTI helped support and launch.

I don’t sleep a lot at night for a number of reasons. Coming off a long stint at the National Security Council, I’m used to having my Blackberry next to my  bed, and so I’m gratified to be in the non-governmental world. But we have a lot of work to do, and I’m really looking forward to getting started.

What’s been some of the most gratifying work you’ve done in recent years?

I served on the White House task force for Ebola from its inception in 2014 through the end of the outbreak, and during that time, we formed a cross White House group that addressed all the different aspects of the Ebola response. I was most focused on how we were working with Guinea, Liberia, and Sierra Leone – not only our response to the immediate crisis, but also the importance of focusing on the longer game of crisis prevention. As a result of U.S. leadership, we made a historic, $1 billion investment to advance the Global Health Security Agenda, which spurred the G-7 Leaders to make a collective commitment to assist 76 countries and regions. Focusing on a longer-term issue in the middle of an immediate crisis is always challenging, but it’s vital in order to get out in front and prevent future tragedy.

I also learned that public health crises bring unexpected consequences, even for well-developed countries like the United States. One of the most powerful experiences I have had in the U.S. government, and in my personal career to date, was a meeting that we held near the end of the epidemic where we brought together U.S. Ebola survivors and their families. We listened to their journey and learned about their recovery, and also, importantly and perhaps surprisingly, we heard about the stigma that some of them still faced in their communities – even in the United States. The fear and panic sparked by Ebola surprised everyone, including me, and it was a powerful reminder that we have a lot of work to do even in our own country as we’re battling infectious disease threats around the world, including education and communication to combat the fear and stigma associated with biological threats.

Get to Know NTI: Aparupa Sengupta

Get to Know NTI: Aparupa Sengupta

On October 27, 2022, the Biden Administration released its Nuclear Posture Review, a document long-awaited by U.S. nuclear policy experts and the international community. Though the administration began crafting the NPR early in Biden’s term, the document’s relevance has been magnified by the heightened nuclear risks facing the world.

Examples from around the world of the Global Health Security Index in-use.