Get to Know NTI: James McKeon

James McKeon joined NTI in 2019 as a program officer with NTI’s Global Nuclear Policy Program, where he focuses on U.S. nuclear policy and posture, U.S.-Russia arms control, U.S.-China strategic stability, and Global Enterprise work to support the Nuclear Non-Proliferation Treaty (NPT). Prior to NTI, James was a policy analyst working on nuclear issues at the Center for Arms Control and Non-Proliferation and served as political director at Council for a Livable World. He was a Scoville Fellow at the Stimson Center in 2014-2015 and a researcher for the Scottish National Party in the UK House of Commons in 2012-2013. He has a bachelor’s degree in Political Science from Northeastern University in Boston.

In what was likely his fifth Zoom meeting of the day, James recently chatted with NTI’s Tabitha Sanders for the latest in Atomic Pulse’s “Get to Know NTI” series. He discussed his overlapping love of fiction and nuclear policy, how the pandemic has changed his work, and his 11,000-mile road trip across the U.S.

Let's start with an easy one. How did you first get into nuclear policy?

It started when I was a teenager and read a book called Pale Blue Dot by Carl Sagan. The book itself has very little to do with nuclear weapons—actually, it’s mostly about astronomy and astrobiology. But the theme is about a photo that was taken from one of the Voyager spacecrafts deep in our solar system, where the earth is so tiny you can barely see it.

Some people would look at that photograph and perhaps conclude that our planet is completely inconsequential and nothing matters. Sagan concluded quite the opposite. Essentially, he said, we are lonely, but that underscores our responsibility to be kind to one another and to preserve and cherish the earth, as the only home that we’ve ever known and likely the only one we’ll ever know anytime soon.

At what point did you decide to pursue a career path in preserving that blue dot?

In college I didn’t even know it was possible to pursue this as a career. But I was tremendously lucky for a number of reasons. 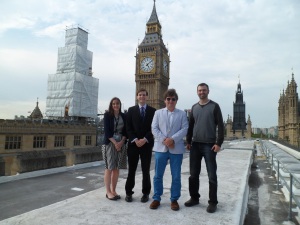 One, I had an internship that turned into a full-time position at the UK Parliament where I was actually able to work on nuclear issues in London. And I was also lucky enough to be selected as the Scoville Fellow in 2014, and that really changed everything for me.

I truly believe I would not be where I am today if it wasn’t for that fellowship. It’s a really worthwhile fellowship, and I’m honored to be an alum.

Catching up to today, how has the pandemic impacted your work at NTI?

Hugely. I was on what I believe was the last NTI trip [before the shutdown] with my colleague, Isabelle Williams. We were in Ghana for a regional workshop in Accra as part of our Global Enterprise to Strengthen Nonproliferation and Disarmament. Obviously, the coronavirus was happening, but we didn’t quite realize how serious it was back then. We had no idea the world was literally about to shut down.

And while Zoom meetings are great alternatives to travel, they don’t quite do it. I think a lot of the benefits of these in-person meetings are sidebar conversations that end up being really productive in the long run, and that’s hard to do virtually. I think everyone on our team (Global Nuclear Policy Program) is really ready for things to get back to normal.

I know a lot of people have coped with remote work in different ways—some visited home, adopted pets, et cetera. But you decided to hit the road. What prompted the trip?

Yeah, it was last summer, early in the pandemic when we didn’t know exactly how the virus spread and we were worried about touching the same door handle as someone else. I felt truly trapped. I was handling some personal challenges, too. So, I decided to start what I thought was going to be a pretty short road trip to see some national parks and it ended up becoming a three-and-a-half month journey around the country. I look back and can’t believe I did that. I’m so lucky. It was such a good opportunity to explore safely and experience places I had always yearned to visit. And I could do it while still doing my job full-time because, of course, everything is remote now.

It sounds like an incredible experience, but that’s a really long time to be on the road alone! Was it ever difficult?

There were definitely tough times, but overall it was worthwhile. There was loneliness, there was a lot of time stuck with my own thoughts on an endless loop. But no matter the challenges of that trip, whenever I would hike a mountain range and get to the peak, usually with no other humans around, I felt truly free – something that’s hard to feel right now.

Ultimately, doing a four-month trip by myself was amazing. But the time alone and the pandemic itself have also made me realize how important human connection is.

We were in a meeting a few weeks ago when all of us were asked what careers we might pursue if we weren’t in our current jobs. People who know you probably weren’t surprised to hear that you said writing. Tell me about that.

I love to write in all different capacities, and I think the great thing about working at NTI is that I write a lot, albeit in a very policy-oriented space. For years now, I’ve also been writing a lot of fiction on the side. I’ve had one short story published, Natalie, and that was a great feeling.

I’ve also been working on a novel for about four years now. Okay,” working” is a relative term. I obviously have not been working on it every day for four years, or else I would have been done years ago! I’ve taken huge gaps in writing it, but it’s something I still want to finish.

Do you see your writing as something totally separate from your work at NTI?

I think it’s no secret that we in the nuclear community struggle to connect with new audiences. I firmly believe that using creative outlets to incorporate nuclear themes would do a lot for this community and a lot for raising awareness about the threats of nuclear weapons.

I love thinking about fictional worlds and characters and incorporating our messages and themes. I actually think this is an avenue to potentially bring new people into understanding and being interested in issues that we hold dear at NTI.

That’s definitely something I think a lot about, too, in my role on our Communications team. This reminds me of the before-times, around 2019, when your friend Morgan Knibbe visited NTI to show his documentary, The Atomic Soldiers. Tell me about your involvement with that project.

So, Morgan is a young Dutch filmmaker who’s been working on this issue for years but really hit a nerve when he published a short version of his documentary The Atomic Soldiers on The New York Times’ website.

I vividly remember being on a run along the National Mall just after I’d watched it, and I was passing the World War II Memorial and something just hit me. 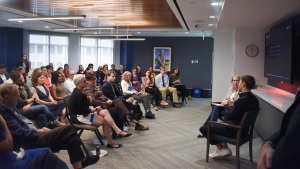 And I realized that I needed to talk to this person because he had put together something in 15 minutes that I think was more meaningful and impactful than anything I had seen since I started in this field years ago.

Morgan and I connected for what was supposed to be a 30-minute chat that turned into an hours-long Skype call. We’ve been friends and collaborators ever since.

Are you working on any projects together?

I won’t go into too much, but both Morgan and I are working simultaneously on a few different projects. I think there are many, many stories left to be told about the Atomic Veterans. The idea of actually witnessing an atomic blast and its effects, living with the experience for decades, and how all of it relates to a potential resumption of nuclear testing—that’s a story to me with a strong theme.

You’ve done quite a bit of work with the Atomic Veterans since then.

Yes, I went to an Atomic Veteran’s convention with Morgan around the fall of 2019 and learned a lot from the people there, who had seen above-ground atomic explosions and how that still impacts them. Speaking with the veterans and hearing their reflections deeply impacted me. They have a profoundly important story to tell.

Well, I’m excited to see what comes out of this work. Thanks again for hopping on Zoom to chat!