Get to know NTI: Leon Ratz

Leon Ratz is a Program Officer with
NTI’s Material Security and Minimization program. He works on issues pertaining
to the security of military nuclear materials, Russian nuclear security, and
other nuclear security and non-proliferation matters. Before NTI, Ratz worked
for the Pacific Northwest National Laboratory as a policy specialist on Russian
nuclear security in the Office for International Material Protection and
Cooperation in the U.S. National Nuclear Security Administration. He has a
bachelor’s degree from Boston College and a master’s degree from Harvard
University’s John F. Kennedy School of Government where he worked as a student
associate at Harvard’s Project on Managing the Atom and published a report on
the national security implications of the dissolution of the U.S. Arms Control
and Disarmament Agency.

How did you end up in Washington and
at NTI?

I followed
the advice of two of my grad school professors, Will Tobey and Matthew Bunn, to
come down to Washington in 2013 for a fellowship at the Department of Energy’s National
Nuclear Security Administration (NNSA). There I had the opportunity to work on
nuclear security cooperation with Russia during (unfortunately) the last days
of the Nunn-Lugar Cooperative Threat Reduction program. One of my mentors at NNSA suggested I apply for a job
at NTI to work on the nuclear materials security and minimization team. I’ll never forget my second day on the job when I got to
brief Senator Nunn on issues related to U.S.-Russian nuclear security
cooperation. That’s when I knew I had landed one of the coolest jobs in DC.

Your work at NTI cuts across several
departments. What are your main areas of focus?

Right now, I mostly work on projects related to
Russia, Central Asia, Eastern Europe, and pretty much anywhere else that speaks
Russian or a similar language.  As you
can imagine, with everything that’s going on in the news, there is no shortage
of things to work on day-to-day. Right now I’m working on a very interesting
initiative to improve regional cooperation on radiological security in Central
Asia. 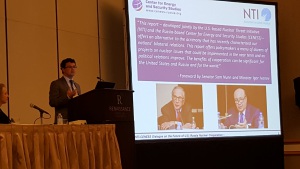 I’m also
part of the team drafting a new report in our Rising Nuclear Dangers series on competing interpretations of
strategic stability between Russia and the West.

Well, my
interest in Russia certainly came first. I’m from the neighborhood originally
(I was born in Ukraine), so I’ve had a strong interest in regional issues since
I was a kid. I knew I wanted to get into nuclear issues when I was a junior in
college and read John Hersey’s Hiroshima,
which offered a harrowing account of what it was like on the ground in
Hiroshima on August 6th 1945. Ever since I read that book, I knew I
wanted to get into a line of work that helped make sure we’d never witness such
hell again.

What are you most proud of?

I think it comes down to getting folks to really
(and I mean REALLY) understand just how dangerous these weapons are.  Hiroshima and Nagasaki killed tens of
thousands of people in a second – and many more in the hours, days, and years
to follow. 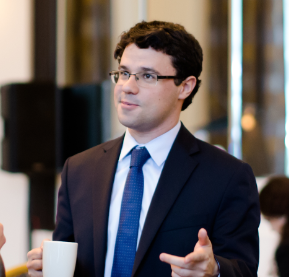 Imagine what
today’s thermonuclear weapons can do. That’s the message young folks like me
need to hear as they make up their minds about nuclear weapons.

What do you do when you’re not trying
to save the world?

I watch
movies about saving the world. The Hunt
for Red October, Crimson Tide, The Peacemaker, and Air Force One are among my favorites.