This blog post was written by NTI summer intern Maggie O’Brien. O’Brien received her Bachelor of Arts degree in Political Science from Northeastern University and is working towards her Master of Arts degree in International Relations from the Johns Hopkins School of Advanced International Studies. O’Brien is working in support of the Communications team at NTI for the William J Perry Project.

One of the most hopeful events of the year, the summer Olympic Games in Tokyo, closed as the world marked the anniversaries of two of the darkest days in human history: the August 6 and August 9, 1945 atomic bombings of Hiroshima and Nagasaki. 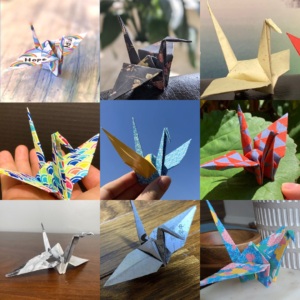 NTI asked organizations and communities, families and individuals to make a wish for our common future by folding an origami crane and sharing a photo of it on social media using the hashtag #CranesForOurFuture.

Hundreds participated to collectively reach millions of people around the world. More than 30 organizations partnered to engage their constituents, including the Carnegie Corporation of New York, the European Leadership Network, and the United Nations Office for Disarmament Affairs. A number of embassies in Japan also participated, including Australia, Slovenia, Denmark, and Thailand.

Among the prominent individuals who folded a crane and shared a message of peace:

The social media platform TikTok allowed individuals to engage with the campaign. Hundreds of content creators on TikTok used the #CranesForOurFuture hashtag and custom crane sticker, posting videos that have been viewed more than six million times. With the majority of TikTok’s users under 30 years old, the platform allowed the campaign to engage with a younger audience. Dozens of volunteers from the advocacy group Beyond the Bomb shared their cranes and answers to the question: What does a world without nuclear weapons look like to you?

The most powerful messages came from those who survived the 1945 atomic bombings. Hiroshima survivor Fumiaki Kajiya shared his own crane after serving as an Olympic torch bearer.

Family members of Sadako Sasaki, a girl who died of leukemia in the aftermath of the Hiroshima bombing, shared their cranes and wishes for people to continue honoring her legacy. In the United States, second- and third-generation survivors of Hiroshima shared their own family stories. Among them: author Kathleen Burinkson and her daughter Sara.

The HOPe organization transformed a collage of paper cranes people shared into a physical panel that they’ll bring to the Children’s Peace Monument, commonly known as Sadako’s statue, in Hiroshima in late September.

By sharing their personal stories, wishes, and origami cranes, survivors and others sent a powerful message over the August 6-9 Peace Weekend, reminding the world of the continuing threat posed by nuclear weapons and sharing hopes for a safer world in which nuclear weapons have no place.

Watching a War Unfold on TikTok

Watching a War Unfold on TikTok

Russia’s war in Ukraine may be playing out in far-away cities, but social media platforms like TikTok and Twitter are bringing the dangers home for people all over the world.

From D-Day to Little Rock, from the Korean War to Cold War crises, from the Red Scare to the Missile Gap controversies, few people have made decisions as momentous as Dwight D. Eisenhower.