As part of
our research into new solutions for spent fuel waste management, we were
fortunate in early February to visit three of the six facilities that make up what is often called the ‘nuclear corridor’ in
Southeast New Mexico and West Texas: the Waste Isolation Pilot Plant (WIPP) and
the URENCO USA uranium enrichment facility in New Mexico and Waste Control
Specialists (WCS) in Texas. (The three we didn’t get to are Sandia and Los
Alamos National Labs in New Mexico and the Pantex nuclear
weapons assembly/disassembly facility in Texas).

Our trip started at WIPP, near Carlsbad, NM. WIPP is the Department of Energy’s repository for disposal of ‘transuranic waste’ from defense programs. Transuranic waste consists of material
contaminated with radioactive elements heavier than uranium and not found in
nature, such as plutonium and americium. The waste is lowered 2,150 feet
underground into a huge pink salt formation formed about 250 million years ago.
Once the deep storage rooms and walls are filled with containers, the salt is
allowed to slowly and progressively cave in from all sides and seal the waste
permanently. 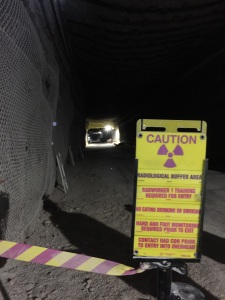 After riding down in a mining elevator for about five minutes, we spent more than two hours almost half-mile underground with the site operators to discuss the mine’s design, engineering features, and safety and emergency response procedures.

We learned about past safety incidents, how the team at WIPP has carefully addressed those problems, and the disposal schedule moving forward.

The next morning, we crossed the state
line into Texas and toured the WCS site in Andrews County, a remote and arid
corner of the state’s vast oil patch. WCS is a privately owned company that
treats, stores, and disposes of low-level radioactive waste from commercial generators
(power plants, hospitals, etc.) in one landfill and the low-level waste from
the Department of Energy in a separate but identical landfill.

Buried in dense, red bed clay and
bolstered by several additional man-made layers of protection against radionuclide
leakage, including a seven foot thick steel-reinforced concrete liner, the waste is isolated from the
surrounding environment until it no longer poses any safety or security risk. WCS
has also submitted an application to the Nuclear Regulatory Commission to build
an interim storage facility for spent fuel from nuclear power plants.

After visiting the WCS site we drove a
mile back into New Mexico to the URENCO USA uranium enrichment facility. Senior
managers gave us a presentation on URENCO’s corporate structure, licensing
history in the United States and business model, followed by a two-hour tour of
the facility. It was a unique opportunity to see, and better understand, the
functioning of a state-of-the-art centrifuge plant.

Each site is
an engineering marvel, and each plays an
indispensable role in the safe and secure functioning of the entire U.S. nuclear
enterprise, from defense and energy to medicine and science.