Promise or Peril? NTI Hosts Discussion on Harnessing the Potential of Emerging Technologies

This post was written by Margaret Nina Miller, an intern with NTI’s Scientific and Technical
Affairs Program. Miller was formerly a Global Nuclear Policy Program intern
with NTI and graduated from the College of William & Mary – University of
St Andrews Joint Degree Programme.

What one word comes to mind when you think about weapons of
mass destruction (WMD) threats and emerging technologies? When the Nuclear
Threat Initiative’s (NTI) Vice President for International Fuel Cycle
Strategies Corey
Hinderstein surveyed an audience of NTI board members and staff, nuclear
and biological security experts and advocates, current and former government
officials, and several members of Congress, the top answers were a mix of
positive and negative: cyber, hypersonic, complex, pandemic,
opportunity, and catastrophe. 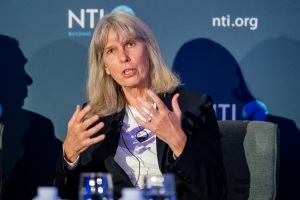 Jill Hruby,
former Director of Sandia National Laboratories, who is winding down a year at
NTI as the inaugural Sam Nunn Distinguished Fellow and is a newly elected NTI
Board Member. 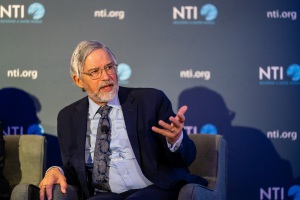 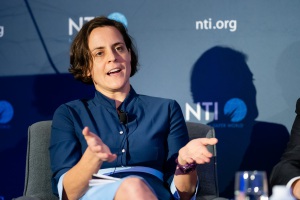 Renee
Wegrzyn, a Program Manager with the Biological Technologies Office
at the Defense Advanced Research Projects Agency (DARPA) and member of the NTI
| Bio Advisory Group.

The Principal Threats from Emerging Technologies

Today’s rapid advances in technology offer the promise of a
safer world but also can outpace governments’ ability to provide necessary
oversight to prevent accidents or deliberate misuse of potentially dangerous
weapons systems, pathogens and biotechnologies.

Holdren noted that “physicists like to figure out what’s
possible, engineers like to build what’s possible,” and then military leaders
take advantage of technological advances and political leaders use technology to
hedge against worst-case scenarios. Arms control is an important factor in
stabilizing this dynamic, but Holdren cautioned that global “arms control
constraints are mostly, at this point, removed.”

Hruby, who is preparing to release an open-source technical
review of Russia’s new nuclear weapon delivery systems, said hypersonic weapons
systems now being developed will “not [be] strategically game-changing” but are
likely to be an “important tool in warfighting.” Responding to a question from Moniz
about defenses against hypersonics, Hruby said this capability would be “hard
in the near-term.” Holdren added that the illusion of defense is dangerous, and
“every time, it ultimately turns out that the offense can defeat the defense
for ten cents on the dollar.” Hruby predicted that defending against hypersonic
missiles may be possible in specific situations, such as defending “high value
assets” like an aircraft carrier, and she also suggested that concerns about hypersonics
have “been a little over-hyped.”

With respect to emerging biotechnologies, panelists agreed
that they constitute a serious threat without proper use and regulation. Wegrzyn
said the genome editing tool known as CRISPR “opens a lot of opportunity for
misuse,” both nefarious and accidental. Similarly, Hruby said she is most
concerned about the misuse of synthetic or targeted biology. Holdren noted that
“[he is] by nature a worrier,” and cited the recently released Global Health Security
Index that demonstrated no country in the world is prepared for a
pandemic.

The Promise of Technological Advances and Solutions to
Strengthen Security

So, what are the most promising areas of research for the
future? Hruby said she expected big data, artificial intelligence, and machine
learning “to completely change transparency in a promising way,” for instance, allowing
the identification of WMD manufacturers by accessing open-source, high-quality
satellite images. Wegrzyn expressed optimism about how advances in biology “can
really impact our everyday lives,” including through the development of medical
countermeasures for biological, chemical, and radiological agents.

As Moniz described, the scientific community is global, but
the regulations surrounding them are not. Wegrzyn spoke to the important work
of building norms about dual-use biotechnology research, particularly in the
absence of international or local regulation. Hruby stressed that major
technological changes are occurring across all fields simultaneously, and the
private sector can fill in the gaps while policy moves slowly to catch up. She
suggested that more companies may be encouraged to self-regulate if
transnational tech companies such as Facebook suffer economic consequences for
failures.

The Need to Build
Understanding and Political Will

Panelists emphasized the difficulty of developing political will
to deal with challenges from emerging technologies. As Holdren noted, “giving
scientific advice to policymakers is perfectly easy when all the scientists
agree,” but disagreements—as in the case of many dual-use technologies—reduce
the impact of technical expertise on the political community. Demonstrated by
the development of a national strategy for the H1N1 virus, rapid adaptation to
emerging threats is possible but requires political leaders to quickly identify
the challenge and agree on a path forward.

Hruby described her position as “informed hope” that “the
government will be faster” than adversaries developing cyber-attacks, due to a
consistent emphasis on cybersecurity.

The tension between the potential benefits gained from new
technologies and the potentially catastrophic risks they pose likely will remain
unresolved for some time. Hruby stressed that technologies like gene editing
with the most capacity to do harm in the hands of nefarious actors will enable
the same changes that could do the most good for global health—while machine
learning and increased transparency have potentially terrifying implications
for society. In other words, “how [scientists] use the tools … is increasingly
important because the good tools are bad, and the bad tools are good.”

Holdren said NTI and other non-governmental organizations
play the valuable role of emphasizing “why restraint is essential to safety” as
experts learn how to manage emerging technologies in the context of WMDs. Research,
policy recommendations, pilot programs, and public education all are necessary
to keep up with the scale and pace of technological change. In the end, both
the audience and panel agreed that the political and technical choices we make
today will determine whether the scale tips toward opportunity or catastrophe.