The Art of the Deal: Irreconcilable Visions of a Denuclearized North Korea?

The Art of the Deal: Irreconcilable Visions of a Denuclearized North Korea?

Are negotiations with North Korea collapsing? In recent weeks, North Korea’s state-run news agency, KCNA, has published a series of commentaries warning that North Korea might return to testing nuclear weapons and long-range ballistic missiles. These statements have been accompanied by statements from unnamed sources warning that the North Koreans are “really angry” about the refusal of the United States to lift sanctions. 1 In early November Kim Yong Chol, North Korea’s top nuclear negotiator, ghosted Secretary of State Mike Pompeo when he failed to show up in Beijing for his flight to New York. 2

To better understand how the United States and North Korea got where they are today, diplomatically, flip through our Interactive Coloring Book which illustrates interactions between the two countries.

Even so, the process may not yet collapse – President Trump has stated that he remains committed to holding a second summit sometime in 2019. And the North Koreans, while hinting at the collapse of the process, have stuck to statements that are mild by typical North Korean standards. Even the recent announcement of a test of an unspecified “tactical weapon” was mellow in tone and contained only one picture, with the weapon itself nowhere to be seen. 3

How Did We Get Here?

It is hard to predict the future given the dramatic highs and lows of the past two years, in which the President of the United States went from demeaning Kim Jong Un as “Little Rocket Man” and threatening him with “fire and fury” to a summit meeting at which he later said “We fell in love.” 4 During this period, Kim Jong Un went from ordering assassins to murder his half-brother with a nerve-agent to posing with South Korean officials on Mount Baekdu making a “finger heart.” 5 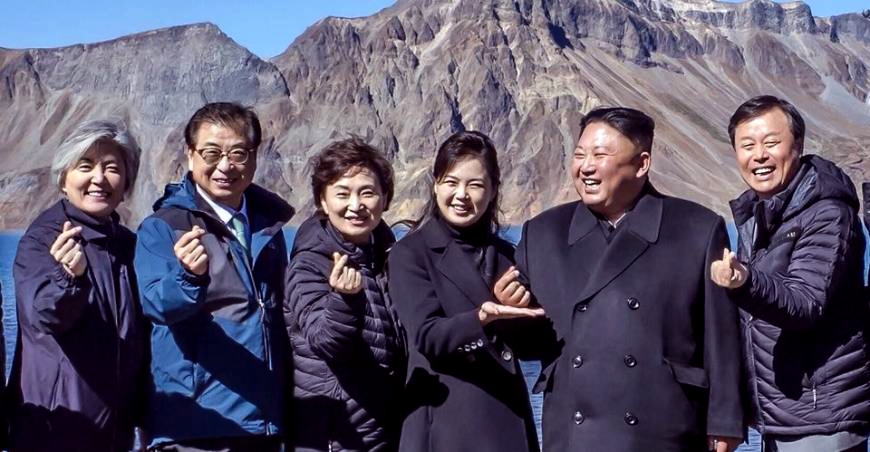 The most important thing to understand is that the fundamental force driving the situation has been North Korea’s achievement of a nuclear deterrent. Kim Jong Un inherited an unfinished nuclear weapons program from his father. In 2017, Kim Jong Un completed this program, demonstrating the capabilities necessary for North Korea to deliver a thermonuclear weapon all the way to the United States. Initially, President Trump responded to these developments with a series of threats and personal insults, often delivered on Twitter.

Then came the thaw. In his 2018 New Year’s address, Kim lauded the “perfection” of North Korea’s nuclear program. With the research and development phase complete, Kim ordered “the nuclear weapons research sector and the rocket industry [to] mass-produce nuclear warheads and ballistic missiles.” 6 In July 2018, the United States intelligence community estimated that North Korea had enough fissile (nuclear weapons-useable) material for between 20 and 65 nuclear weapons, with some U.S. intelligence agencies believing North Korea could add as many as twelve nuclear devices per year. 7

The shift from research and development to mass production meant that North Korea no longer needed to conduct the provocative missile and nuclear tests that drove the diplomatic tensions of 2017. This allowed Kim Jong Un to announce a new focus on the economy, even as North Korea’s nuclear arsenal continues to grow.

The successful completion of Kim’s nuclear deterrent allowed him to talk – and also forced the Trump Administration to talk back: “There is a school of thought that the United States should not sit down, that the United States president should not sit down with two-bit dictators,” explained Senator Tom Cotton, one of Trump’s staunchest defenders. “I think there’s some validity to that school of thought with the exception once those dictators have nuclear weapons.” 8

That conversation with North Korea took place on 12 June 2018, when President Donald Trump and Supreme Leader Kim Jong Un met in Singapore. In a joint statement, both countries committed to “work towards the complete denuclearization of the Korean Peninsula.” 9 Yet this was not the simple agreement for North Korea to disarm that the President’s defenders have claimed.

The North Koreans are not, despite what officials from Seoul and Washington might suggest, offering to disarm. What the Singapore Statement says – and indeed what the North Koreans have always offered, even dating back to the era of Kim Il Sung – is to work toward the “denuclearization” of the Korean Peninsula. But this is a North Korean phrase, not an American one – and it does not mean “disarmament” in the sense that most American observers presume. The term “denuclearization” dates to the period prior to North Korea’s acquisition of nuclear weapons. When the North Koreans use it, they are primarily talking about ending nuclear threats by the United States against North Korea, not giving up their arsenal. Of course, North Korean officials are aware that they now possess nuclear weapons, but from their point of view it was the United States that “nuclearized” the peninsula in the first place through its security commitments to South Korea, and compelled Pyongyang to seek its own nuclear capability in response.

From a North Korean perspective, the United States created the current situation – and it is up to the United States to fix it. The North Koreans believe they have done more than enough to earn a new relationship with Washington and win relief from international sanctions. From their perspective, they have ended the provocative nuclear and missile tests that marked 2017, and replaced them with a series of positive news stories about closing the Punggye-ri nuclear test site, dismantling some structures at the Sohae Satellite Launching Station, and discussing possible closure of some facilities at the Yongbyon Nuclear Center.

North Korean officials, on the other hand, have made it clear that Pyongyang has no plans to unilaterally abandon its nuclear forces. For Kim Jong Un, denuclearization is a process, more an aspirational goal than a concrete commitment. North Korea successfully insisted that the United States drop the phrase, “complete, verifiable and irreversible disarmament,” refused U.S. demands to agree to a timetable for disarmament, and rejected proposals to declare the scope of its programs. In the meantime, North Korea has continued to produce fissile material and missiles, including building more ICBMs at its Sanumdong research complex and expanding a key facility near Hamhung involved in production of airframes for medium-range ballistic missiles. 10

In the United States, however, the view is very different. While Trump has expressed affection for Kim and patience with the process, U.S. officials have made it clear that sanctions will not be eased until North Korea agrees to disarm. Secretary of State Mike Pompeo has promised that any agreement will be more stringent than the Iran nuclear deal, must include access to military facilities, and must be agreed to no later than January 2021. Despite Trump’s positive public statements, there is a growing awareness within the Administration that North Korea is unlikely to abandon its nuclear weapons anytime soon.

There is now a growing debate in the United States about the wisdom of this process. Virtually everyone prefers the diplomacy of 2018 to the war talk of 2017. This includes many experts, like me, who do believe that engagement is worthwhile even if Kim refuses to abandon his nuclear weapons. Despite widespread skepticism about Kim’s interest in disarmament, many people successfully argue that “the only way to find out, is to negotiate step-by-step and see how far we get.”

At some point, something must give. The North Koreans hope that it will be Trump who gives in — overruling his staff and lifting sanctions in exchange for the sort of goodwill gestures that North Korea is offering. Trump’s advisors, however, hope it will be Kim Jong Un who backs down and accepts a more traditional process of disarmament for relief from sanctions, perhaps starting with a declaration of its nuclear facilities in exchange for a political statement declaring the end of the Korean War. 11

Hopes that Kim will be the one to give depend on the belief that he is different from his father and grandfather. Optimists hope that Kim is the man who made a finger heart with South Korean officials on Mount Baekdu and not the man who executed his uncle and sent assassins to murder his half-brother. Of course, he’s both. But there is at least one important way that Kim is different from his father and grandfather: he has a nuclear deterrent.

Modern technologies like cyber are introducing new risks to nuclear systems and underscore the need and urgency of conducting a new failsafe review.

This paper offers a focused set of recommendations for specific commitments related to practical and achievable actions that States parties to the Treaty on the Non-Proliferation of Nuclear Weapons (NPT) could take to advance the NPT’s goals and achieve success at the 10th NPT Review Conference.

Act Now to Deter the Next Nuclear Smuggling State

Act Now to Deter the Next Nuclear Smuggling State

How to deter the next case of state-sponsored nuclear dual-use trafficking.

Ballistic missile
A delivery vehicle powered by a liquid or solid fueled rocket that primarily travels in a ballistic (free-fall) trajectory.  The flight of a ballistic missile includes three phases: 1) boost phase, where the rocket generates thrust to launch the missile into flight; 2) midcourse phase, where the missile coasts in an arc under the influence of gravity; and 3) terminal phase, in which the missile descends towards its target.  Ballistic missiles can be characterized by three key parameters - range, payload, and Circular Error Probable (CEP), or targeting precision.  Ballistic missiles are primarily intended for use against ground targets.
Sanctions
Punitive measures, for example economic in nature, implemented in response to a state's violation of its international obligations.
Tactical nuclear weapons
Short-range nuclear weapons, such as artillery shells, bombs, and short-range missiles, deployed for use in battlefield operations.
Nerve agent
A nerve agent is a chemical weapon that attacks the human nervous system, leading to uncontrolled nerve cell excitation and muscle contraction. Specifically, nerve agents block the enzyme cholinesterease, so acetylcholine builds up in the nerve junction and the neuron cannot return to the rest state. Nerve agents include the G-series nerve agents (soman, sarin, tabun, and GF) synthesized by Germany during and after World War II; the more toxic V-series nerve agents (VX, VE, VM, VG, VR) discovered by the United Kingdom during the 1950s; and the reportedly even more toxic Novichok agents, developed by the Soviet Union between 1960 and 1990. The development of both the G-series and V-series nerve agents occurred alongside pesticide development.
Deterrence
The actions of a state or group of states to dissuade a potential adversary from initiating an attack or conflict through the credible threat of retaliation. To be effective, a deterrence strategy should demonstrate to an adversary that the costs of an attack would outweigh any potential gains. See entries for Extended deterrence and nuclear deterrence.
Fissile material
Fissile material: A type of fissionable material capable of sustaining a chain reaction by undergoing fission upon the absorption of low-energy (or thermal) neutrons. Uranium-235, Plutonium-239, and Uranium-233 are the most prominently discussed fissile materials for peaceful and nuclear weapons purposes.
Disarmament
Though there is no agreed-upon legal definition of what disarmament entails within the context of international agreements, a general definition is the process of reducing the quantity and/or capabilities of military weapons and/or military forces.
Dismantlement
Dismantlement: Taking apart a weapon, facility, or other item so that it is no longer functional.
Intercontinental ballistic missile (ICBM)
Intercontinental ballistic missile (ICBM): A ballistic missile with a range greater than 5,500 km. See entry for ballistic missile.