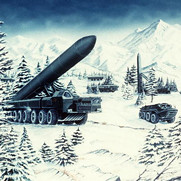 Information and analysis of nuclear weapons disarmament proposals and progress in the United States.

Tactical nuclear weapons
Short-range nuclear weapons, such as artillery shells, bombs, and short-range missiles, deployed for use in battlefield operations.
Highly enriched uranium (HEU)
Highly enriched uranium (HEU): Refers to uranium with a concentration of more than 20% of the isotope U-235. Achieved via the process of enrichment. See entry for enriched uranium.
Nuclear Security Summits
Nuclear Security Summits: A series of international summits that emerged out of U.S. President Barack Obama's call in April 2009 to "secure all vulnerable nuclear material around the world within four years." The summit process focuses on strengthening international cooperation to prevent nuclear terrorism, thwarting nuclear materials trafficking, and enhancing nuclear materials security.
Sanctions
Punitive measures, for example economic in nature, implemented in response to a state's violation of its international obligations.
Treaty on the Non-Proliferation of Nuclear Weapons (NPT)
The NPT: Signed in 1968, the Treaty on the Non-Proliferation of Nuclear Weapons (NPT) is the most widely adhered-to international security agreement. The “three pillars” of the NPT are nuclear disarmament, nonproliferation, and peaceful uses of nuclear energy. Article VI of the NPT commits states possessing nuclear weapons to negotiate in good faith toward halting the arms race and the complete elimination of nuclear weapons. The Treaty stipulates that non-nuclear-weapon states will not seek to acquire nuclear weapons, and will accept International Atomic Energy Agency safeguards on their nuclear activities, while nuclear weapon states commit not to transfer nuclear weapons to other states. All states have a right to the peaceful use of nuclear energy, and should assist one another in its development. The NPT provides for conferences of member states to review treaty implementation at five-year intervals. Initially of a 25-year duration, the NPT was extended indefinitely in 1995. For additional information, see the NPT.
Partial Test Ban Treaty (PTBT)
The PTBT: Also known as the Limited Test Ban Treaty (LTBT), the Treaty Banning Nuclear Weapons Tests in the Atmosphere, in Outer Space and Under Water prohibits nuclear weapons tests "or any other nuclear explosion" in the atmosphere, in outer space, and under water. While the treaty does not ban tests underground, it does prohibit nuclear explosions in this environment if they cause "radioactive debris to be present outside the territorial limits of the State under whose jurisdiction or control" the explosions were conducted. The treaty is of unlimited duration. For additional information, see the PTBT.
Comprehensive Nuclear-Test-Ban Treaty (CTBT)
The CTBT: Opened for signature in 1996 at the UN General Assembly, the CTBT prohibits all nuclear testing if it enters into force. The treaty establishes the Comprehensive Test Ban Treaty Organization (CTBTO) to ensure the implementation of its provisions and verify compliance through a global monitoring system upon entry into force. Pending the treaty’s entry into force, the Preparatory Commission of the CTBTO is charged with establishing the International Monitoring System (IMS) and promoting treaty ratifications. CTBT entry into force is contingent on ratification by 44 Annex II states. For additional information, see the CTBT.
Strategic Arms Reduction Treaty (START I, II, & III)
Refers to negotiations between the United States and the Soviet Union/Russian Federation, held between 1982 and 1993 to limit and reduce the numbers of strategic offensive nuclear weapons in each country’s nuclear arsenal. The talks culminated in the 1991 START I Treaty, which entered into force in December 1994, and the 1993 START II Treaty. Although START II was ratified by the two countries, it never entered into force. In 1997, U.S. President Bill Clinton and Russian President Boris Yeltsin discussed the possibility of a START III treaty to make further weapons reductions, but negotiations resulted in a stalemate. Following the U.S. withdrawal from the Anti-Ballistic Missile Treaty (ABM) in 2002, Russia declared START II void. START I expired on 5 December 2009, and was followed by the New START treaty. See entries for New START and the Trilateral Statement. For additional information, see the entries for START I, START II, and New START.
Ratification
Ratification: The implementation of the formal process established by a country to legally bind its government to a treaty, such as approval by a parliament. In the United States, treaty ratification requires approval by the president after he or she has received the advice and consent of two-thirds of the Senate. Following ratification, a country submits the requisite legal instrument to the treaty’s depository governments Procedures to ratify a treaty follow its signature.

See entries for Entry into force and Signature.
Lisbon Protocol (START I Protocol)
Lisbon Protocol: Refers to the protocol of the 1991 START I Treaty, which entered in force in December 1994 as the result of negotiations between the United States and the Soviet Union/Russian Federation, held between 1982 and 1993 to limit and reduce the numbers of strategic offensive nuclear weapons in each country’s nuclear arsenal. For additional information, see entry for Strategic Arms Reduction Talks and START I Treaty.