Get To Know NTI: Corey Hinderstein

Corey Hinderstein is NTI’s Vice President of the International Fuel Cycle Strategies. She works on issues pertaining to the intersection of civil nuclear activities and national security, with a focus on nuclear verification. She previously served as the senior coordinator for nuclear security and nonproliferation policy affairs at the National Nuclear Security Administration, U.S. Department of Energy (DOE), as well as the deputy director and senior analyst at the Institute for Science and International Security (ISIS). Corey sat down with NTI’s Caitlyn Collett for the latest in Atomic Pulse’s “Get to Know NTI” series.

CAITLYN COLLETT:  You’ve worked at NTI in a number of capacities. Could you tell me about your time here? 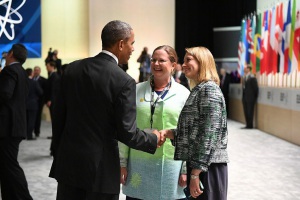 COREY HINDERSTEIN:  I originally started at NTI in April of 2006, and I was here through January of 2014. I started as a Director for Special Projects, and I was taken on in particular to work on the creation of the World Institute for Nuclear

Security (WINS), though I certainly worked on a number of
other issues.  At that time NTI was very
Russia, former Soviet Union, focused, so I came in not being a Russian
specialist in order to work on the rest of the world. Over time, our work has
become much more international. Then, in January 2015, I went to the Department of Energy on
an Intergovernmental Personnel Act (IPA), an arrangement designed to help people
from the academic or specialist community come in and give their expertise to
the government for short periods of time. After three years, I decided to come
back to NTI in December of 2017.

COLLETT:  Well, you must have missed us!  We’re glad you’re back.

HINDERSTEIN:  Thank you.
I am glad to be back.

COLLETT:  Now, you serve as the Vice President of the International
Fuel Cycle Strategies at NTI, a new program under our CEO, Ernest Moniz. Will
you tell us a little bit about that?

HINDERSTEIN:  The International Fuel Cycle Strategies
program was really created to focus a lot of NTI’s interest on where the civil
nuclear energy world and the nonproliferation world connect. We work on supporting
the spread of nuclear energy for both energy security and climate reasons without
increasing proliferation risks.

We also look at where civil nuclear activities have the
potential to cross over into national security space, for example, in Iran or
in North Korea where there is a blurring of the lines between civil nuclear
energy and proliferation concerns.

On top of all of that is the verification task. Anywhere
that there is nuclear energy, we need to make sure there is adequate, robust
verification so that we can determine if those lines are being crossed.

COLLETT: That all
seems like very crucial work and definitely not an easy task. Did you always
know that you wanted to work in nuclear policy?

HINDERSTEIN: No, not at all.

COLLETT:  What first inspired you? 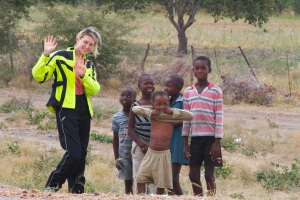 My parents really instilled in me a sense of doing work for yourself but also for the greater good. My first job in Washington as an intern was working on light weapons trade and arms trade and that was interesting to me, but I can’t say it ever captured my imagination, as important as it is.

Then, I received an opportunity because I was rejected for a job.  The people who rejected me passed my resume on to somebody else who worked in nuclear. They told me they were interested in bringing me on, and I remember thinking at the time that I was really not sure, not because I didn’t think nuclear issues were important or interesting, but it was really scary.  I am child of the Cold War.  I grew up in the ’80s and I literally used to wake up with nightmares that we were being bombed by the Russians.

I remember they used to interrupt television with statements like, “We now interrupt this program with breaking news, here is our anchor in New York,” and there would be this long beep. Every single time one of those came on I thought it was nuclear war.  I mean I was terrified.

So, when the opportunity came to work on this, I was intrigued but also scared.  I think that maybe that experience, really having this visceral memory of feeling like this threat is real is probably what kept me engaged as we went forward. Then, once I got into the field, I was hooked.

COLLETT:  Wow, that does really personalize the issue. Working on global issues has given you the chance to do a lot of travel. What’s been your favorite trip, and what has been your most memorable trip?

HINDERSTEIN:  I am so lucky to be able to travel for work, and my husband and I choose to travel for pleasure, too.  I have visited 45 countries (and Taiwan) at last count, and I have two more new ones already planned for 2019. I think my favorite place is Vienna. I mean obviously Vienna is a beautiful city with great food and architecture and art and everything else, but it’s a place where I’ve found my rhythm. When you go to a place regularly, you know how the subway works, where the shops are that you like, the restaurants you enjoy, how the work dynamic is with your professional colleagues, and that kind of thing. I mean, I can’t count the number of times I have been to Vienna because of the International Atomic Energy Agency (IAEA). Also so many other events are hosted in Vienna because the IAEA is there. So, I would say that it’s probably my favorite place, because it’s comfortable and at that same time very different from home. 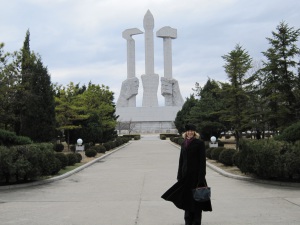 My most memorable trip, by far, is North Korea. It was a fascinating trip and I think that it was an interesting time to be there. North Korea is not like anywhere in the world.  Even now, North Korea has opened only a little since I was there in 2011, so to have an opportunity to experience something like that is pretty amazing.

COLLETT:  I am in awe right now, what a unique trip! What did you get to see while you were there?  What were you allowed to see and do?

HINDERSTEIN:  We were only in Pyongyang. We did have meetings with the people from the nuclear site at Yongbyon, but they came to Pyongyang. Most meetings were related to the substance, but they also were really intent on wanting us to have a good impression of North Korea. So, we went to their war museum, which told their side of the story and it’s amazing when you read all of the displays. According to them — they won the war!

COLLETT: I know you and your husband do a lot of adventure travel – you ride motorcycles, you scuba dive. What’s next on your personal travel list?

HINDERSTEIN:  We just booked a long weekend in Mexico City, so that will be interesting.  We’re going to Norway next summer to spend time with friends at their house there, and we’re going to do a lot of hiking and getting out into the mountains.

We’ve had one amazing trip to Southern Africa, and we really want to do more in Africa. My husband and I are very committed to environment and wildlife conservation, so that trip was really inspiring to us. We really want to do a motorcycle trips through Kenya, Tanzania, Rwanda, and Uganda. We also like to do dive trips – and for those, our list is long. The problem is there are more places to go than there is time!

COLLETT:  It seems like you’ve already accomplished so much! 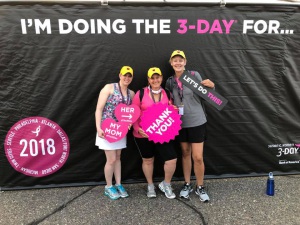 COLLETT:  Speaking of incredible experiences, if you hosted a dinner party and could only invite five people, living or dead, who would you invite?

HINDERSTEIN: I guess I would be really torn as to whether it would be for my enjoyment or for my inspiration or for my intellectual curiosity. I would love to have dinner with Commander Chris Hadfield, the first Canadian to walk in space and former commander of the International Space Station, because my dream job is astronaut. Then, absolutely, my mother, Sheila Gay, who died of breast cancer in 2005.

Then, I think I would have to put President Obama on the list. And not for the politics of it but I just think he experienced and has continues to experience so much. I was lucky enough to meet him but that’s not same as having a dinner conversation.

I would really love to meet with women that have been pioneers in their field. I would love to meet Sandra Day O’Connor. I think she would be a fascinating person because she was the first of her kind.

I suppose I would also love to meet somebody who has nothing to do with me. An expert in something I know nothing about or in some completely remote field. I might not know who the preeminent female theoretical mathematician is or the preeminent person in coral conservation and reconstruction, but I would be very interested in what they do and why they do it.