The Italian Navy currently operates a submarine flotilla comprised of four improved Sauro-class vessels and four modern Type 212A Todaro-class units. The Italian Peninsula hosts several naval bases for the Italian Navy, such as La Spezia, as well as bases for NATO forces.1 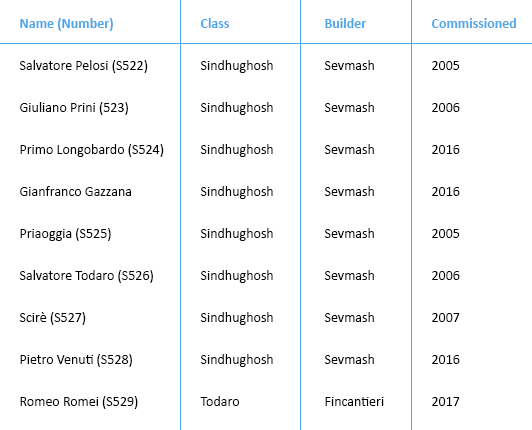 Italy first developed the Sauro-class submarines in the 1970s as a tool to counter the underwater threat of the Soviet Union. Italian shipbuilding company Fincantieri built these vessels in Monfalcone. In 2005, two of the original six submarines were retired and the remaining four—the Salvatore Pelosi (S522), Giuliano Prini (S523), Primo Longobardo (S524), and Gianfranco Gazzana Priaroggia (S525)—were upgraded. These upgrades included replacement of the acoustic sensors and weapons control system, improvements in the communications system, and extension of the service lines.2

In July 2019, Fincantieri announced that it would build four more U-212 submarines under license from Germany’s Thyssenkrupp Marine Systems (TKMS). The first of these new vessels is set to enter into service in 2025, which will then allow Italy to retire its older Sauro-class submarines.7

Italy possesses four improved Sauro-class submarines. The new Sauro-class vessels are between 64.4 and 66.4 meters long with a 6.8-meter-wide-beam and can travel up to 19 knots when submerged. They can remain submerged for about 45 days without surfacing. Their weapons systems are capable of firing torpedoes and anti-ship missiles.8

Italy possesses four Todaro-class diesel-electric submarines. These vessels are hybrid diesel‐electric/fuel cell submarines with Air Independent Propulsion (AIP). They are 55.9 meters long with a 7-meter-wide beam and can travel up to 20 knots when submerged. They can remain submerged for about 30 days without surfacing. Their weapons systems are capable of firing BlackShark torpedoes.9

Italy has traditionally constructed its own submarines. However, in 1996 the German and Italian defense ministries concluded a Memorandum of Understanding initiating cooperation in the construction of a new generation of submarines.10 Italy’s Fincantieri Shipyard is currently manufacturing Type 212A submarines based on designs from Germany’s Howaldtswerke-Deutsche Werft (HDW).

Italian shipbuilder Fincantieri SpA carries out the bulk of the state’s naval constructions at the Muggiano and Riva Trigoso shipyards in Italy. The firm cooperates with Germany’s Howaldtswerke-Deutsche Werft (HDW) to offer submarines with air-independent propulsion (AIP) technology.11 The two main vessels that Fincantieri offers for export are the Todaro-class (U212A) diesel-electric submarines and the S1000 vessel. The Todaro-class submarines are constructed as part of the German-Italian Submarine Programme.12 The S1000 vessels are the result of a 2005 joint venture with Russia’s Rubin Naval Design Bureau. These submarines are based on the Russian Amur SSK but feature Italian AIP technology.13 In 2013, Russia and Italy announced plans to upgrade the S1000 but in 2014 Italy indefinitely suspended this plan over the Russian government’s involvement in the Ukraine crisis.14 In 2017, the shipbuilder Fincantieri signed a deal with the Qatari government that includes a large helicopter carrier, called a Landing Platform Dock (LPD), four warships, two patrol boats, shore support, and assistance with a new offshore naval base. In February 2021, it was reported that a Memorandum of Understanding had been signed, which could include the delivery of submarines to the Arab Gulf country.15 This would make Qatar the first Gulf country to operate submarines.

North Atlantic Treaty Organization (NATO)
The North Atlantic Treaty Organization is a military alliance that was formed in 1949 to help deter the Soviet Union from attacking Europe. The Alliance is based on the North Atlantic Treaty, which was signed in Washington on 4 April 1949. The treaty originally created an alliance of 10 European and two North American independent states, but today NATO has 28 members who have committed to maintaining and developing their defense capabilities, to consulting on issues of mutual security concern, and to the principle of collective self-defense. NATO is also engaged in out-of-area security operations, most notably in Afghanistan, where Alliance forces operate alongside other non-NATO countries as part of the International Security Assistance Force (ISAF). For additional information, see NATO.
SSBN
Ship, Submersible, Ballistic, Nuclear: A hull classification for a submarine capable of launching a ballistic missile. The "N", or nuclear, refers to the ship's propulsion system. SSBN's are generally reserved for strategic vessels, as most submarine launched ballistic missiles carry nuclear payloads. A non-strategic vessel carries the designation SSN, or attack submarine.
Diesel-electric submarine
Diesel-electric submarine: A submarine with a diesel-electric transmission. Diesel-electric transmissions require access to oxygen for the diesel generator to charge the submarine’s batteries or drive the motor. This type of submarine is thus louder and must surface more frequently than a nuclear-powered submarine. A diesel-electric submarine can fire conventional cruise missiles against land targets, and in theory, can also carry nuclear-tipped cruise missiles. Diesel-electric submarines are significantly cheaper to build and purchase than nuclear-powered vessels, which makes them the vessel of choice for smaller navies.
Air Independent Propulsion Technology (AIP)
Air Independent Propulsion Technology (AIP): A propulsion system that uses liquid (or compressed) oxygen or hydrogen fuel cells, thereby allowing submarines to stay submerged for longer periods without the need for external sources of oxygen. This increased endurance also increases a submarine’s survivability.