The Royal Australian Navy (RAN) currently operates six diesel-electric Collins-class submarines, which are based at Fleet Base West, HMAS Stirling, south of Fremantle in Western Australia.1 The Department of Defence plans to add twelve new Attack-class submarines to the fleet in the 2030s as well as a new submarine base in Sydney to split the fleet between the east and west coasts.2 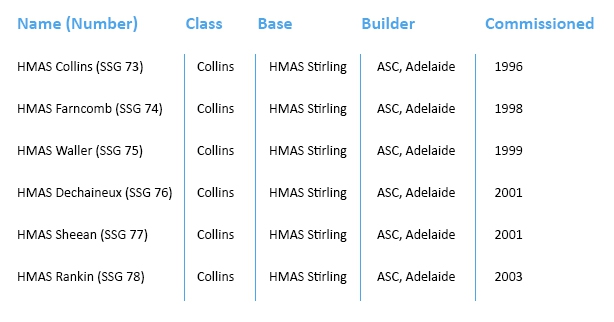 The current fleet of Collins-class vessels are based on the Kokums Type 471 design. The oldest submarine in the Australian fleet, the HMAS Collins, was constructed in 1990 and was commissioned in 1996. The remaining 5 Collins-class submarines were commissioned over the following seven years.4

In a 2009 Defence White Paper, the Australian government announced its intent to replace the fleet of Collins submarines with twelve 4000-ton long-range submarines by 2030. The Department of Defence plans for the new submarines, the Attack class, to conduct anti-ship and anti-submarine warfare as well as intelligence collection.5 In 2016, the Australian government selected the French company Naval Group to build the Attack-class submarines and in February 2019 finalized the $50 billion contract. In the 2009 White Paper, and again in 2013 and 2016 White Papers, the Department stated that Australia has no incentive to develop nuclear-capable submarines as the “nuclear and conventional military capabilities of the United States can offer effective deterrence.”6

Australia possesses six Collins-class diesel-electric attack submarines. These submarines are 77.8 meters long with a 7.8-meter-wide beam and can travel up to 20 knots when submerged. They can remain submerged for about 70 days without surfacing and are armed with 533mm torpedo tubes. Their weapons systems can carry up to 22 surface-to-surface missiles and Tomahawk SLCMs.7

In May 2016 the Australian government purchased twelve submarines from France; the submarines will be locally built by ASC and replace the existing Collins-class submarines employed by RAN.8

Although in the 1990s the Australian Submarine Corporation expressed interest in exporting submarines to smaller countries in Southeast Asia such as Indonesia, Malaysia, Japan, Thailand, and Singapore, Australia is not currently a submarine exporter.9

Interact with 3D models of submarines from China, North Korea, and Russia. Produced by the James Martin Center for Nonproliferation (CNS).

View global trends in sale and acquisition of diesel- and nuclear-powered submarines, information on capabilities, imports and exports.