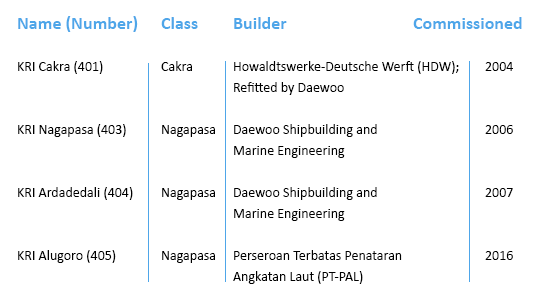 Indonesia has expressed interest in acquiring more submarines to protect national interests and guard resources and sea-lanes. In 2006, Agence France-Presse reported that Indonesia was contemplating buying a total of 12 submarines from Russia, South Korea, or China. Owing largely to budgetary constraints, these procurements did not materialize; nevertheless, officials from TNI-AL continue to express aspirations for a large submarine fleet.5 In 2010 Deputy Naval Chief of Staff Vice Admiral Marsetio expressed his belief that Indonesia needed 39 more submarines to protect the country’s vast marine territory against external threats.6 Media reports citing Indonesia’s Defense Strategic Plan 2024 note that the document is aiming for a capability of at least 10 submarines.7

In April 2021, the German-built KRI-Nanggala 402 went missing off the coast of Bali during a torpedo drill. Debris from the submarine confirmed that it had descended to a deep seabed and fractured into three pieces. None of the 53 crew members survived.8

In December 2011, the Indonesian Ministry of Defense signed a $1.1 billion contract with DSME to increase its Navy with three Type 209/1400 diesel-electric attack submarines by 2020. Two of the vessels, christened the Nagapasa-class, were built in South Korea. The Nagapasa (403) was launched on 24 March 2016 at the Daewoo Shipyard and was delivered in 2017.10 The KRI Ardadedali (404) was launched on 24 October 2016 at Daewoo’s Shipyards and commissioned in April 2018.11 Indonesian state-owned shipbuilder Perseroan Terbatas Penataran Angkatan Laut (PT-PAL) constructed the third vessel which was launched in April 2019.12

In early April 2013, the Indonesian Navy opened the Palu Naval Base in Palu, Central Sulawesi to serve as the Navy’s main submarine base. Navy Chief of Staff Adm. Marsetio explained that the Palu Naval Base is well positioned to project Indonesian power in the Ambalat region, which is located just 550 km away and is the scene of an ongoing territorial dispute with Malaysia.13 On 28 September 2018, a tsunami struck Sulawesi, damaging the Naval Base and halting plans to deploy the Nagapasa-class submarines.14

Indonesia possesses two Cakra-class diesel-electric attack submarines. These submarines are 59.5 meters long with a 6.2-meter-wide beam and can travel up to 21.5 knots when submerged. They can remain submerged for about 50 days without surfacing. Their weapons systems are capable of firing torpedoes.15

Indonesia possesses three Nagapasa-Class diesel-electric attack submarines. These submarines are 61 meters long with a 6.3-meter-wide beam and can travel up to 21.5 knots when submerged. They can remain submerged for about 50 days without surfacing. Their weapons systems can fire anti-ship missiles and torpedoes.16

Indonesia is not an exporter of submarines.

Interact with 3D models of submarines from China, North Korea, and Russia. Produced by the James Martin Center for Nonproliferation (CNS).

View global trends in sale and acquisition of diesel- and nuclear-powered submarines, information on capabilities, imports and exports.

SSBN
Ship, Submersible, Ballistic, Nuclear: A hull classification for a submarine capable of launching a ballistic missile. The "N", or nuclear, refers to the ship's propulsion system. SSBN's are generally reserved for strategic vessels, as most submarine launched ballistic missiles carry nuclear payloads. A non-strategic vessel carries the designation SSN, or attack submarine.
Diesel-electric submarine
Diesel-electric submarine: A submarine with a diesel-electric transmission. Diesel-electric transmissions require access to oxygen for the diesel generator to charge the submarine’s batteries or drive the motor. This type of submarine is thus louder and must surface more frequently than a nuclear-powered submarine. A diesel-electric submarine can fire conventional cruise missiles against land targets, and in theory, can also carry nuclear-tipped cruise missiles. Diesel-electric submarines are significantly cheaper to build and purchase than nuclear-powered vessels, which makes them the vessel of choice for smaller navies.
Air Independent Propulsion Technology (AIP)
Air Independent Propulsion Technology (AIP): A propulsion system that uses liquid (or compressed) oxygen or hydrogen fuel cells, thereby allowing submarines to stay submerged for longer periods without the need for external sources of oxygen. This increased endurance also increases a submarine’s survivability.
Deployment
The positioning of military forces – conventional and/or nuclear – in conjunction with military planning.